[Pureinsight.org] Shen Yun Performing Arts will have four shows in the Netherlands during the European tour this year. It has been recently reported that the Chinese Embassy threatened the theater in order to cancel the show, but the theater flatly refused. This has drawn the attention of mainstream media in the Netherlands. The Chinese Communist Party’s (CCP) attempt to infiltrate overseas art performances has caused great attention.

Whether it is in the United Kingdom, Switzerland, Italy, Germany, France, Austria, or Spain, wherever Shen Yun Performing Arts tours, all the tickets are sold out. Shen Yun attracts celebrities from all over the world.

However, the Nieuwe Luxor Theater in Rotterdam where Shen Yun would to perform recently announced to the Dutch Ministry of Foreign Affairs that the Chinese Embassy requested it to cancel two Shen Yun shows on May 15, 2018, which has been confirmed by the Dutch Ministry of Foreign Affairs.
The sponsor of Shen Yun -- Falun Dafa Association of the Netherlands’ president Wang Jia-en said Nieuwe Luxor Theater told her that the CCP threatened the theater in order to cancel the Shen Yun performance by email and phone, but the theater refused.

“Shen Yun’s mission is to revive the lost world of traditional Chinese culture and share it with everyone through Chinese classical dance. It will not be possible for the CCP to stop the performance in Rotterdam,” said Wang Jia-en. 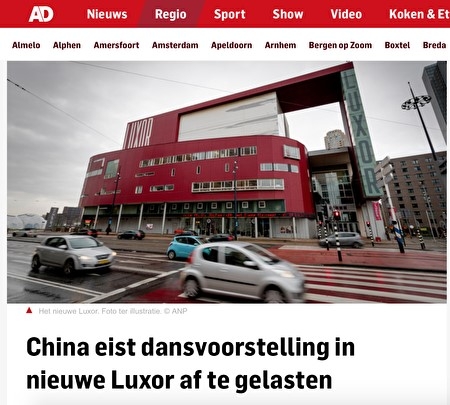 This event has grabbed mainstream media’s attention. 《Algemeen Dagblad》, a daily newspaper covering 45 cities in the Netherlands, reported that the CCP tried to stop the Shen Yun Performance in Rotterdam on April 18. The article wrote, “Performing arts group (Shen Yun) has been asked to cancel its show by the CCP just because some of Shen Yun’s programs show that the CCP is persecuting Falun Gong.  The response from the Dutch Ministry of Foreign Affairs is that theater has the right to make the final decision on whether to stop or keep the show.” “On the Nieuwe Luxor Theater’s website, information about Shen Yun’s performance is still announced there.” 《Algemeen Dagblad》has an extensive reader group and has both printed daily newspapers and online news channels.

Main newspaper《BNdeStem》in southwestern Netherlands also reported this on April 21. “The CCP tries to obstruct performing arts group (Shen Yun) from performing in a theater in Rotterdam. This theater has received an email and a phone call threatening them to stop the show.” Not only was the performance in Rotterdam unaffected, but Shen Yun will also go to Chassé theater in Breda for two show afterwards. 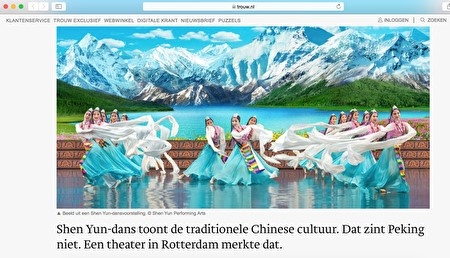 Since Shen Yun started, the CCP has sought to block Shen Yun from performing around the world. In Europe alone similar things have occurred in many cities, such as London, Berlin, Stockholm, Munich, Brussels and so on.

In an interview with NTDTV, commentator Dr. Jason said, “Shen Yun uses an art form with pure beauty and pure compassion to allow audience members with different religious beliefs, different cultures, and different backgrounds to understand real Chinese culture. It shows Falun Gong practitioners’ compassion even under the CCP’s persecution. It reflects the CCP’s brutal act and reveals its lies. How can the CCP not be afraid of that?”

Shen Yun Performing Arts tours 100 cities in about 20 countries every year.  It dazzled audiences in Europe with sold-out performances. On April 28 and 29, Shen Yun will start two shows in Chassé Theater in Breda, a southern city in Netherlands.