[PureInsight.org] The 2018 Falun Dafa Cultivation Conference in Canada was held on May 13 in Toronto. Over 1,200 practitioners attended the event. Master Li said in Zhuan Falun, “The entire cultivation process for a cultivator is one of constantly giving up human attachments.” About 20 speakers shared how they gave up human attachments in different situations by following “Truthfulness-Compassion-Tolerance” to do better in their cultivation. 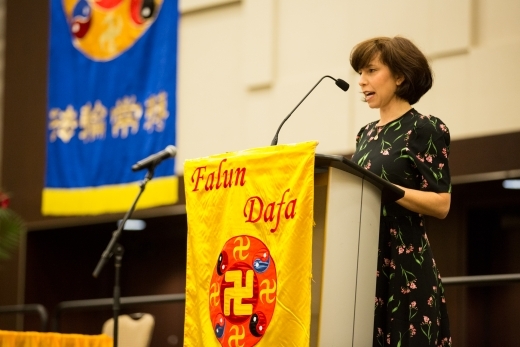 Everyone has Jealousy. Ms. Trudeau, a Falun Gong practitioner from British Columbia, shared her story about eliminating jealousy.

Chrisy Trudeau said that her jealousy has manifested at work, in her family and under other social circumstances. For instance, she sometimes argued with her husband, who is also a Dafa practitioner, only because her husband suggested a better way to finish some tasks. “I didn’t even think about his suggestions before I rejected him. But when I calmed down, I actually figured out that his methods were better than mine,” said Chrisy Trudeau. Although she realized that her husband was trying to help her when she had calmed down, when things happened, she felt like her husband was criticizing her and showing off. There was once a time that they had to finish an important job together before a deadline. They almost failed because of arguing.

Later, she realized that she became jealous when she saw other practitioners' strengths that she did not have.  In order to do better in cultivation, she must eliminate jealousy. “Lately, when my jealousy starts to come out, I will ask myself why I am jealous of this person. Then jealousy will turn to be admiration after a second thought. I will start to think that it is great for me to learn from him/her to improve the skills that he/she has. It is actually awesome because our projects do need people with these skills.”

Think from others’ Perspectives 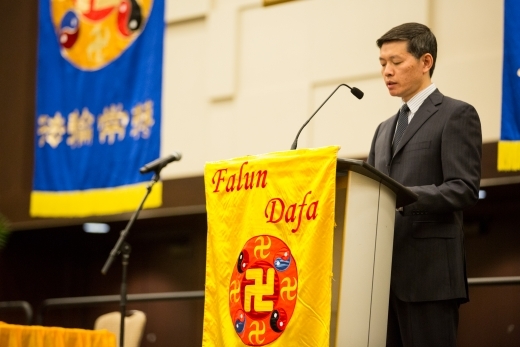 Persuasive skill is what many people want to have. If you blush while talking to strangers, how can you be persuasive? Mr. Liu, a Falun Dafa practitioner in Toronto, made it with the goal of clarifying the truth about Falun Dafa.

Mr. Liu shared his cultivation experience. He used to “blush, or even start trembling when others refute him”. In order to clarify the truth to people who have been influenced by the Chinese Communist Party (CCP)'s propaganda, Mr. Liu started to call people in mainland China. At first, he felt very nervous even when he just listened to others make phone calls to China. He was worried that the person who answered might have a bad attitude and hang up.

From cultivation, Mr. Liu realized that people will listen and understand as long as he tries to think from others’ perspective. However, it is not easy to change his personality to be outgoing. Mr. Liu said, “When I tried to make phone calls, it was either that I didn’t have the courage to pick up the phone or to start the conversation. It turned out that people wouldn’t listen if I was very nervous.”

Mr. Liu studied Fa and eliminated attachments in order to overcome this problem. He believes that people will be moved when he is thinking from their perspectives selflessly. With studying the Fa constantly, he found himself clearer and that people on the phone will listened to him.

Mr. Liu said, “When I stop considering myself and truly want people to distinguish between good and evil. I found myself more familiar with what to say and I could speak more naturally. And people can accept better.”

For example, Mr. Liu made a phone call to China. A lady picked up the phone. When Mr. Liu clarified the truth about Falun Gong, the lady accepted that. But while asking her to quit the communist party, she refused to do that. Then Mr. Liu told her about truth about the CCP patiently, she finally started to share her story. She has petitioned for 6 years and no one paid attention. At last, she decided to quit the CCP. 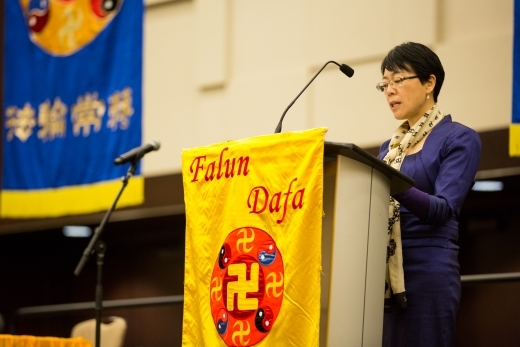 In the second half of 2016, Ms. Chen from Alberta experienced great changes with her body. She didn’t want to eat at first. Her stomach was very painful at night and she could hardly fall asleep. One month later, she lost tens of pounds within several days.

Ms. Chen continued to study the Fa and do the exercises. She had unbearable pain while doing the exercises. All of her body was soaked after doing the exercises. But she never gave up. Ms. Chen got pain in her stomach, then right lower abdomen and heart, then the kidneys and lungs, then the limbs. She could only lay down in one direction at night and there were noises which keep her from falling asleep. Her hair dropped out a lot at that time.

As a cultivator, Ms. Chen realized it is very important to keep looking within and eliminate attachments. During that time, she found many attachments, such as resentment, impatience, attachments to prove herself and comfort. She started to eliminate these attachments after realizing them. Finally, her body started to recover. She gained weight from 70 pounds to 110 pounds. Her hair grew back, her hands and feet grew new skin. She said she is very grateful for Master during this reborn process.

“All arranged by the divine” 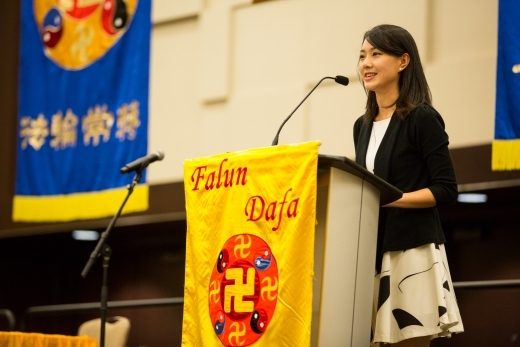 Ms. Zheng is an outstanding graduate from a famous Chinese drama university. She is a professional actress. She found it hard to realize her dreams after graduation. Ms. Zheng began to practice Falun Gong in 2014, after which she got the courage to overcome difficulties.

Ms. Zheng loves being an actress, but the company usually will ask actresses in the company to do micro plastic surgery. However, she believes that plastic surgery doesn’t comply with “Truthfulness”. Moreover, as a cultivator, she shouldn’t drink, which is very common among actors and actresses. She felt it difficult to deal with.

At that time, a film producer in Canada invited her to go abroad and act in a film. The film is what she wanted to make. “When I made the decision to come to Canada, I got the visa successfully. Everything went on more smoothly than I expected.”

Ms. Zheng said, “My friend told me that this world treats me really well, while I know it’s all arranged by divine.”