[PureInsight.org] November 11th is Veterans Day in the United States. The 103rd New York Veterans Day Parade took place on Fifth Avenue in Manhattan. More than 280 groups and more than 20,000 people participated, even though it was raining. The Falun Dafa group has been invited to participate in the parade for nearly 20 consecutive years now, paying tribute to the veterans and bringing the value of "Truthfulness-Compassion-Forbearance" to the public. 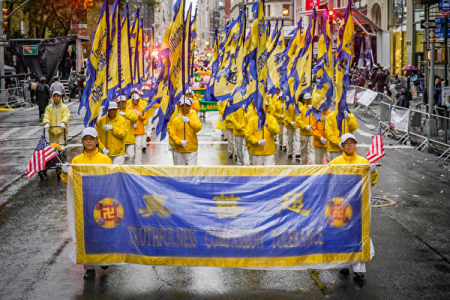 The organizers first held a flower-laying ceremony at Madison Square. The parade starts along Fifth Avenue from 26th Street to 45th Street, passing Madison Square Park, Empire State Building, Bryant Park, and other famous landmarks. Octogenarians, soldiers, veterans’ groups, civic groups, youth groups, etc. nearly more than 20,000 veterans braved the drizzle to participate in the parade. Although it was raining, they were in good spirits and lined up neatly, showing the strong will of veterans and soldiers. Floats, military bands, and huge American flags appeared one after another. People watched the parade in the rain, felt grateful for the service members for their contributions to defending the country and maintaining world peace, and paying tribute to veterans. 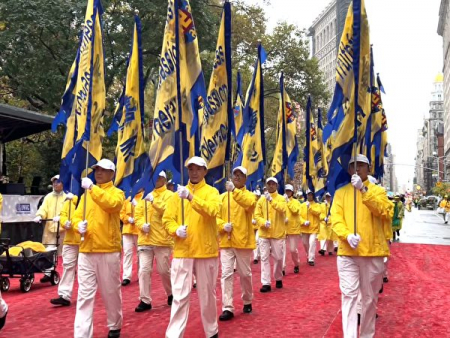 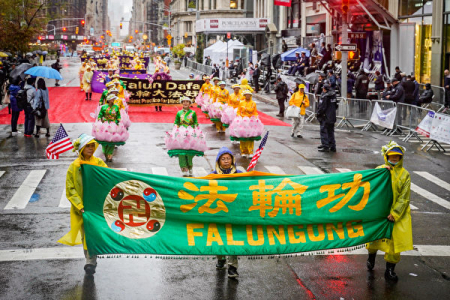 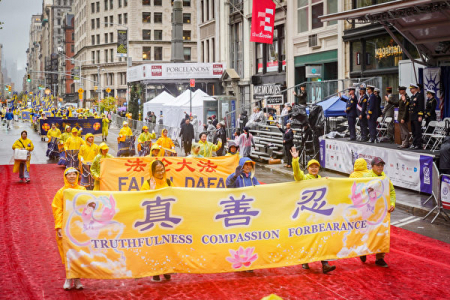 A parade audience member said, "We learn from history, there are mistakes and there are victories. My father is a veteran of World War II, and we take this chance to express our patriotism."

U.S. Army Major General Rod Faulk said in an interview, "I'm so glad the community is out and supporting veterans. Happy Holidays to millions of American veterans."

The Falun Dafa group participated in the grand event as in previous years. The Divine Land Band, the practice team, the flag formation, the lotus dance team, the waist drum team, the banner team, and the LED car appeared one by one, bringing unique and bright colors. This is the only Chinese team in the parade. The LED car with three huge screens is ingenious, and the picture shows: "Thank you, veterans, salute you, thank you for your service."

As soon as the Falun Dafa Divine Land Band appeared on the stage, its momentum was like a rainbow, shaking the audience. The music of "Falun Dafa Is Good" and "The Holy King of Falun" resounded all over the place, full of sacredness. The members of the band are dressed in ancient Chinese soldiers' clothing. The Band played drums, snare drums, flutes, piccolo, clarinet, oboe, saxophone, trumpet, horn, tuba, French horn, sun horn, baritone, and other instruments and it has the largest variety of instruments among the military bands participating in the parade.

When the group of Falun Gong practitioners passed by, the host of the organizer "United War Veterans Council" loudly said, "Falun Dafa! Falun Dafa has five sets of exercises and advocates ‘Truthfulness-Compassion-Forbearance’. They participate in the parade each year. Thank Falun Dafa for participating!" The members of the podium and the audience below saw warm applause. 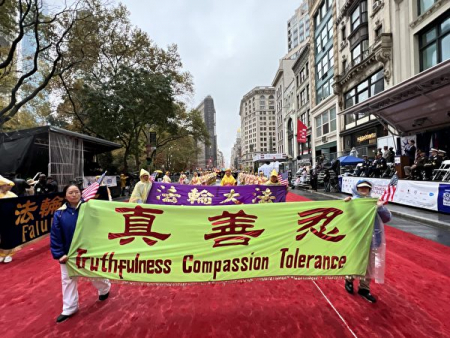 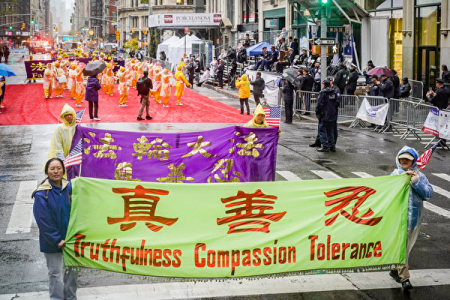 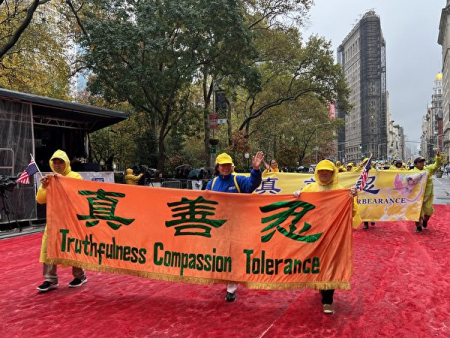 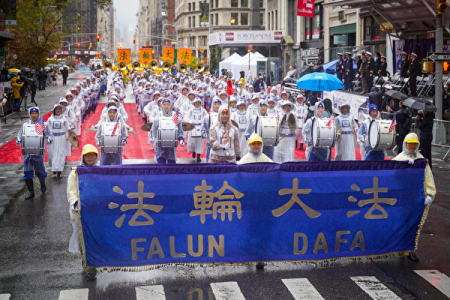 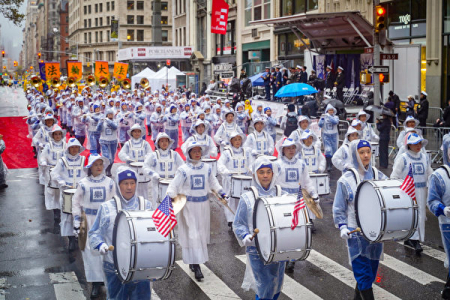 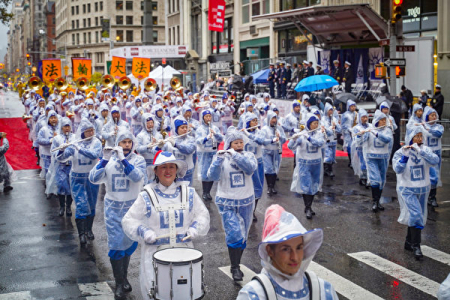 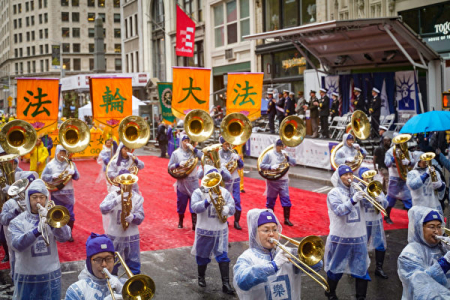 Rod Faulk said in the interview, "[The Divine Land Band] is so fascinating, they are very talented, the team is huge and wonderful!"

Yi Rong, head of the Falun Dafa Society in New York, said in an interview that the New York Veterans Day Parade is the largest Veterans Day parade in the United States. Falun Gong groups participate in the parade every year to pay tribute to the veterans; Falun Gong practitioners defend the spirit of freedom of belief, which is recognized and welcomed by the organizers. People also like the Falun Gong team. With the passage of time, more and more people realize that Falun Gong is very good, and it is beneficial to society without any harm. We also bring the brilliance of Falun Dafa to everyone and let everyone hear about Falun Dafa.

After seeing the Falun Gong team, veteran Bridget said, "(The Falun Gong team) is very beautiful. I was just talking about this team. I am a veteran. I saw them practicing Falun Gong. I wonder if this is helpful to the veterans. I'm still searching for more information on my phone, and I want to know more. I think it should be helpful to veterans."

The origin of Veterans Day is November 11, 1919, was the first Armistice Day, and November 11 was designated as a national federal holiday in 1938. After World War II, the U.S. Congress changed the name of the holiday to Veterans Day in 1954 to pay tribute to the soldiers who participated in the American wars.