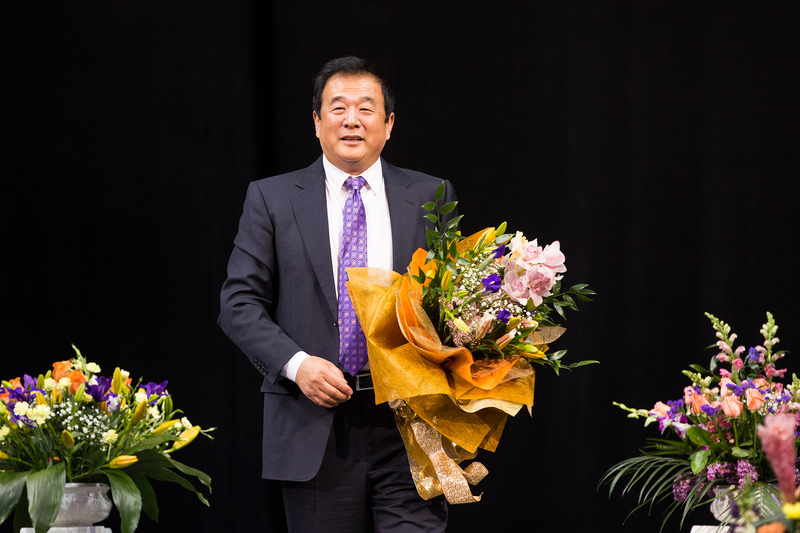 On May 14, more than 10,000 Falun Gong practitioners from 58 countries and regions gathered at the Barclays Center in New York for the experience sharing conference. It was the climax for the four days’ events to celebrate the 25th anniversary of Falun Dafa's introduction to the public.

At around 2:50 pm, more than 10,000 Falun Gong practitioners stood up to welcome Master with applause. Master Li Hongzhi came onto the stage to deliver a lecture and answered questions for about two hours. Master also told practitioners to cherish time by doing the three things well in their own way.

More than a dozen practitioners around the world shared their experiences on how to improve themselves by following “truthfulness, compassion, and forbearance” in their daily life.

Doctor in the US: Doing Well at Work, Daily Life, and Practice

Mai He is a Falun Gong practitioner from Missouri. He served as an associate professor at a prestigious medical school in the United States after completing his Ph.D. degree and passing the board exam.

He required himself to do everything well including housework, clinical practice, scientific research, teaching, Shen Yun promotion, and truth clarification to the local government. As a result, nothing was neglected.

He has been a professional doctor with the most certificates in the hospital. He was invited to join an international Academic Committee. He also received an invitation to prepare an outline for the national resident. His professional association awarded him the highest honor of the year. He publishes three or four academic articles every year.

He experienced Dafa’s greatness and rigorousness after remarkable success. He said, “It has been 25 years since Master introduced Dafa. I have read Zhuan Falun for almost 21 years. I can tell I was guided by Master since I obtained Dafa. From personal practice to the truth clarification and Shen Yun promotion, the longer I practice, the greater, more harmonious and more rigorous I feel.”

From the Program Editor to the Host

There were several young speakers that day. Twenty-year-old Miss Yin came from South Korea. Currently, she works on TV program production and hosting. It was hard to imagine she was just a normal editor two years ago.

From 2008 until now, she went from being a translator to becoming an experienced director and host. She talked about the hard progress behind filming interviews with stars.

She said, "You can only see the star and me on TV, but there were lots of staff members from both sides as well. Especially for the A-list, his or her assistant, image designer and staff members are in the dozens. It was hard to pick up several topics in twenty or thirty minutes. I do feel big pressure for each shot.”

Initially, she doubted herself, complained about others, and was scared of not being photogenic. She wanted to quit and cried every night alone.

Later, Master showed her the predestined relationship between those stars and her in a dream. She could feel that they wanted her to save them. Thereafter she never thought about quitting but instead prepared interviews until midnight.

At the final program step, she always sent forth righteous thoughts: “I must save these stars.”

Miss Yin always did truth clarification to those brokerage firms first with righteous thoughts before setting up the interview with those stars. She tried to promote the positive culture by excluding the variation from modern society in the program.

With a pure mind, she interviewed more than 30 stars and celebrities inside or outside South Korea. They were not easy to be interviewed, and avoided invitations even from the Korean mainstream media, or royalties.

Huiqiang Fan was a practitioner from Australia. He had smoking and alcohol habits for a long time. However, it only took him few hours to get rid of those habits after learning Dafa.

He shared his experience about looking inward and improving Xinxing. He said he got angry easily during his early cooperation experiences. He looked inward repeatedly and put down the attachment to self. Now he realized as a cooperator, he could cooperate with others as well. Then everything became well.

He also said that he could feel Master’s compassion several times in the process of looking inward. Each time, he was full of tears.

After learning Zhuan Falun, he realized, “As long as you look inward, you can always find your own attachment. No matter what condition you are in, never try to change others and instead change yourself. Now I always look at myself first instead of at others.” He also found that bad things would disappear after he changed.

New Jersey practitioner Cai Yi did security work during Dafa activities. His daughter reminded frequently that he lacks compassion, but he did not take it seriously.

Once, Cai Yi asked his daughter what kind of job would be better for him. His daughter told him to be a policeman.

He was surprised because he had been a scholar and had nothing to do with police.

When he asked for a reason, his daughter said it was because he enjoyed catching bad guys. He was so shocked and wondered how he could leave such an impression with his daughter.

Again on the way home, his daughter said: "Little disciples are too noisy that we cannot stay here. I was thinking if you could come in and roar at them, they might be quiet.”

Children and fools speak the truth. He looked inward and realized he should be kinder.

Later, Cai Yi could always explain the activity rules kindly when he served as a security officer. Most people were pleased to accept and cooperate. He realized that compassion was more powerful than coercion.

Truth Clarification to the Mainland Tourists

A lady practitioner from Germany shared her experiences clarifying the truth to the Chinese tourists. She said she met all sorts of people: some were positive about Falun Gong, while others refused to listen. She said the process of truth clarification was like “wandering”. During that process, she let go of the attachment to losing face and dealt with it righteously.

“I always remember Master’s teaching of keeping righteous thoughts and being kind to others”, she said.

“I use a peaceful tone, trying not to trigger the negative side of others. After eliminating their precautions, I will talk to them by coming from their points of view.” She said she knew how to restrain herself and eliminate the attachment of competitiveness. Gradually, the environment changed, and the interference lessened. It was Dafa’s power.

In 2000, Helena Cheng broke her left foot and was told the recovery process would take at least half a year to one year. However, after participating at the Falun Dafa Conference in New York, her foot fully recovered and was even better than before. She began cultivation ever since.

Helena Cheng started to distribute the English Epoch Times to the government and officials since 2004. From initial cold reception to later friendship, she experienced lots of touching stories. She then began constantly receiving rewards from Congressmen. Her cultivation improved accordingly.

“Day by day, year by year, in addition to the government officials and their assistants, I did truth clarification to everyone including staff, interns, guards, officials, voters, and visitors as long as I met them.” Cheng said.

"I do not believe I can befriend them today. Sometimes if I run into a birthday party or retirement banquet when I distribute newspapers, they always invite me to have cake together.” She also recalled, “I told an assistant of the House of Representatives about Dafa. He was so touched. After reading it, he stuck the front page of the newspaper in the parliamentarian seat. He said, ‘The parliamentarian would not miss it this way.’

“This congressman is the one who raised the Falun Dafa Day last year and this year", said Helena Cheng.

Master’s appearance encouraged practitioners. All practitioners benefited from the experience sharing exchange during the conference.

It was the first time for mainland practitioner Yanping Han to participate in the conference. She arrived in the US ten months ago. She was so touched and could not express how excited she was.

In 2001, she was persecuted in Masanjia reform school by being illegally detained for two years in a labor camp since 2001. She said, "There are a huge number of practitioners in mainland who want to meet Master. It is not easy for them under such severe persecution. I really appreciate Master’s benevolent salvation. I am so lucky to practice Dafa because Dafa only comes once in thousands or even tens of thousands of years!”

Twenty-four-year-old Jiang Zhuoxiu came from Japan. She has practiced for 20 years. She said, “I am so excited. I also feel so touched by all the stories here. It seems to me that everyone has a different way to practice, but they all improve themselves constantly in cultivation by finding their own deficiencies.”

Lorenz Amstutz was a young man from Switzerland. He was very excited about his first foreign event. He said, "I want to bring the experience back to Switzerland for better truth clarification locally.”

Eight-year-old Lisa Pang has practiced with her parents since she was born. She said she came to learn about others’ experiences today. Her only wish was to see her dad. Lisa’s dad Guangwen Pang has been imprisoned for five years in Shanghai because of truth clarification to his University classmates. He still has not been released.

Ms. Sylviane Scarba came from Silicon Valley, California. She said she was so happy to participate in the largest Fa conference this year. It was the most beautiful and moving event in which she has ever participated. She could feel the true hearts of the Falun Gong practitioners.

After practicing Falun Gong, she knew the meaning to come here was to obtain the Fa. Through Fa study, she learned how to become an altruistic being.”

Over the past few days, more than 10,000 Falun Gong practitioners from 58 countries and regions had a series of events in New York to celebrate the 25th anniversary of Falun Dafa being introduced to the public. They had a thousand-person rally, practiced together, created a large-scale character, and held a parade.

People from the world praised the activities with "beautiful", "spectacular", "shocking", and "moving"! Mr. Li Hongzhi introduced Falun Gong in Changchun, mainland beginning on May 13, 1992. Now it is welcomed by people in over 100 countries around the world.

In the face of eighteen years of continuous persecution by the CCP, Falun Gong practitioners have always followed the teachings of Master Li: "truthfulness, compassion, and forbearance". Now, more and more practitioners participate in each year’s activities, and they become even stronger. Many practitioners promised to meet again next year!