A Dafa Disciple in Germany

[PureInsight.org] On the evening of February 19, 2019, after the performance of Shen Yun International Art Group in Dortmund, Germany, the audience at the Dortmund Opera House stood up and applauded for a long time. 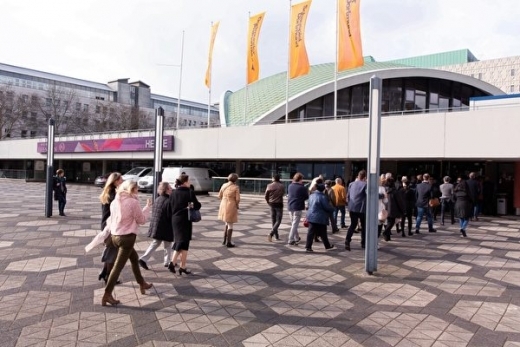 There are two performances in the afternoon and evening at the Dortmund Opera House. Tickets for the show were sold out in the evening and the afternoon one is also full. According to the staff of the Opera House, it is a rare achievement that the house is full in a Tuesday afternoon show. It is already a box office miracle. Moreover, the audience watching the show is not the regular audience watching opera, but new audience group. This is very gratifying for the opera house.

In fact, this box office phenomenon appeared in Essen a week ago. The staff there, like the staff of the Dortmund Opera House, were very surprised that Shen Yun can achieve such a proud box office.

The exquisite performance of the Shen Yun has opened the eyes of the audience. Artists were also fascinated by it. They all said that this is a rare top art performance. 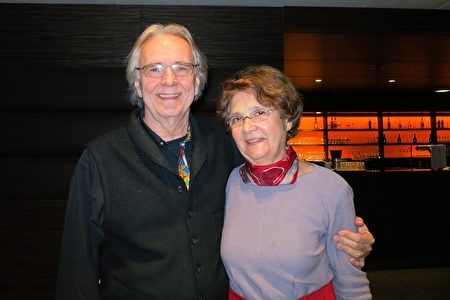 On the afternoon of February 19th, Franz Lauter and his wife Hanna Lauter watched the second performance of Shen Yun in Dortmund, Germany.

As a painter and backdrop creator, Franz Lauter pays special attention to the dynamic backdrop of Shen Yun. He praised that Shen Yun backdrop “is made very well. The three-dimensional rendering has great originality. The interaction between dancers and backdrop is making the story perfect.” “I can only congratulate.”

Franz Lauter has also done stage himself. He has painted the stage for play Cinderella in the UK. He also produced different stage sets in Poland and Germany. He said, “There is a lot of work behind the production of the stage set. (Shen Yun) has finished the work perfectly with modern technology. And there is no mistake at all.”

Franz Lauter was amazed by Shen Yun’s stage set, which is simple but perfect effect. He said that Shen Yun “used just a few elements to complete the backdrop.”

And in the dance, the actors jumped out of the backdrop and jumped back. “You have an illusion as if things in the painting come to the audience.”

He said from a professional point of view, “it is admirable that there is no grating in such a large-sized backdrop, which is so great. Usually, after zooming in, the grating is visible.” He said, “This explains Shen Yun uses awesome technology and also moves the backdrop by photography and video.”

This superb scene made him stunned. He praised the backdrop is “perfect and flawless”.

He also praised Shen Yun “brings the audience a peaceful slowdown to the rhythm of today’s life.”

His wife, Hanna Lauter, was originally engaged in legal work and now moving behind the scene to support her husband’s artistic work. She said that Shen Yun is not only perfect with backdrop, but also with the artists. She said, "Especially the last show is very good, this appeal to the world: if we don't wake up, what will happen. Everything we build now will be destroyed in some way. So I think this performance was very good, not only dance, but also thought-provoking." Franz Lauter agreed with his wife.

Shen Yun’s mission is to revive traditional civilization. Hanna Lauter said, “This is very important, especially for today’s society. It is true for China and Europe.” “Especially for our artistic tradition, many people are thinking, what should it be developed. If everyone thinks, it doesn’t matter, fashion is more important.” The husband took the wife’s words, “just like the modern ‘phubber’ showed in the last program, they only stare at the phone.”

Franz Lauter said, “We should pay less attention to materials, but pay more attention to spirit, because people’s greatest strength comes from the spirit.”

Hanna Lauter said that it was not easy for them to come to the show. The road was blocked because of a car accident on the road. Although the process was not smooth, there was a good ending in the end. 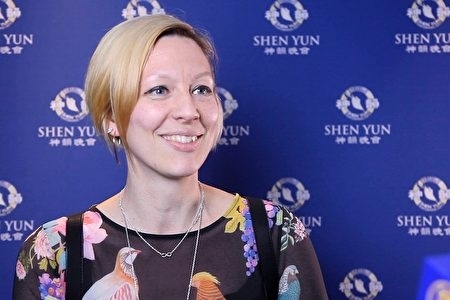 Shen Yun came to Dortmund to show Eastern traditional art to the Europeans. Katharina Tiemann, a ballet teacher at the Modern Dance Center, watched the third performance of the Shen Yun on the evening of February 19, 2019. She was completely conquered.

“The performance is extraordinary, it’s great. Whether its dress, dance or action level, it’s top.” She said that although she is a ballet teacher, “I have never seen such a show before. It’s great! ”

She is full of praise for the artist's outstanding skills. "It's unbelievable from the softness of the actor and the ability to control the body while jumping." She also marveled at the perfect performance of the dancers. "I don't know how to describe, their jumps are powerful, and the action is beautiful. That is incredible!”

She said that with the costumes, the host's commentary, etc., "all elements work together seamlessly and it is definitely worth watching."

She observed that Chinese classical dance has a variety of styles. Men's dance is strong and the women's dance is soft and elegant. “The women’s long-sleeved dance is very charming and intoxicating. There are also men’s dances on horseback. You really think that the actors are riding horses. The action is very realistic and superb.”

Shen Yun brought her very strong feeling. She said that she can't summarize her feelings in one sentence, but in any case, "the performance is absolutely superb."

Dance school headteacher: It is hard to describe the beauty 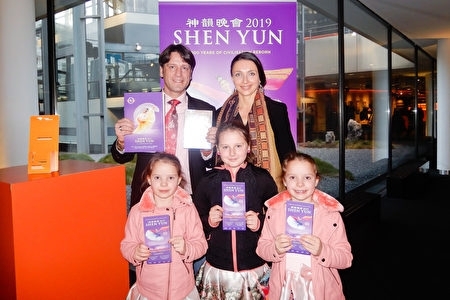 On the afternoon of February 19, 2019, Sascha Drohla and his wife Oxanaund Drohla with their three daughters watched the second performance of the Shen Yun Performance at the Dortmund Theatre in Germany.

Mr. Drohla has a dance school and he says his dance school "is of course completely incomparable with Shen Yun." He said, "I didn't know what I would see before I came. When I saw such a wonderful performance, I couldn't find the right language to describe. I have never seen such a perfect performance. I am a dancer and a dance teacher myself. The dance of Shen Yun is really impressive. It is so precise and expressive.”

The rich expressiveness of Shen Yun dance makes him feel incredible. The dance “uses body movements as expressions, while Shen Yun dances can express such rich emotions, and all emotions can be expressed only by body language”.

As a dancer, Mr. Drohla knows that the perfect performance is directly proportional to the effort that actors put behind the performance. "Yes, I did a lot of training, but I think that Shen Yun must do a lot more training than me." He was moved by Shen Yun performance.

Mr. Drohla also greatly appreciated the Shen Yun music, "It's wonderful! The composing, and the combination of Chinese and Western instruments are extraordinary!"

His wife Oxanaund Drohla praised, "It's so wonderful! The color is wonderful." She said that she had never gotten a chance to know Chinese traditional culture before. She did not expect Chinese dance to be so "beautiful, elegant, beautiful and dreamlike." The dancers showed a variety of difficult moves, and the movements were also very light and cheerful. "The control of the body is superb!"

The traditional Chinese culture shown on the stage of Shen Yun shocked Mr. Drohla. “I am very yearning for this culture. China has a long history. I feel that China is a country of etiquette. The way to treat others and think about others is great. Chinese ancients treat people with the standard of the righteousness, peace, and decentness, which is neglected in Western society. Now we can benefit from the revival of the ancient Chinese traditional culture."

Mr. Drohla saw news about Shen Yun last year, but regretted that he did not make it. This year he wanted to watch the Shen Yun performance with his wife and three daughters. When they walked out of the performance hall, the family had a smile on their faces. "I will definitely take my children and come again." Mr. Drohla said affirmatively.