The Persons Involved in the Tiananmen Self-Immolation Hoax

[PureInsight.org] On January 23, 2001, the Chinese New Year’ Eve, five people on Tiananmen Square poured gasoline over their clothes and set themselves on fire. One of them died on the scene. China Central Television (CCTV) had the English report on this incident released right away. Though its media reporting claimed that all of the immolators were Falun Gong practitioners, many flaws can be examined in the news footage. In the past twenty years, the international community has acknowledged that the incident was staged by the Chinese government to outlaw Falun Gong.

This article hope to help readers see through the CCP’s fake news. 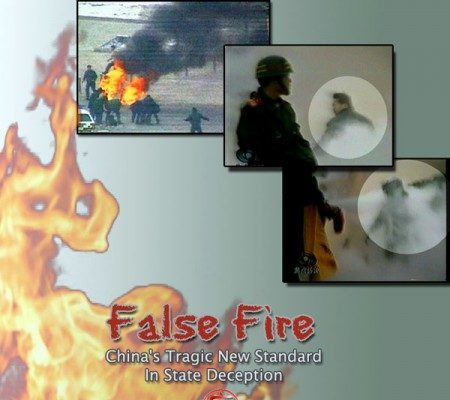 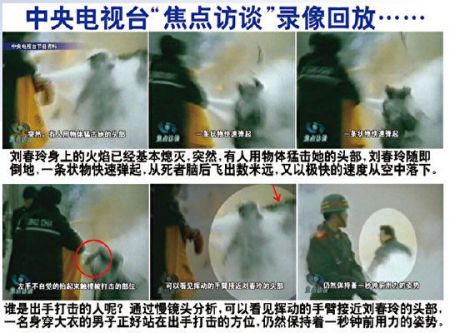 If we slow down CCTV’s video footage, we can see that Liu Chunling, who was at the scene, was slammed by a heavy object of striped shape to the ground.

The footage shows that Liu Chunling was bludgeoned on the head by a man in military suit. The "strip" bounced back after hitting Liu Chunling and jumping very high.

In 2012, an overseas media revealed that a member from “610” office (a CCP’s organisation set up specially to persecute Falun Gong) was on the scene when the self-immolation incident occurred. He was originally from Yuzhong district, Chong Qing city. He saw a sturdy military policeman picking up a portable fire extinguisher and bludgeoned a woman who was covered in smoke on the back of the head. The woman fell down to the ground. Due to the excessive force, the handle of the fire extinguisher fell off and flew into the air.

Two weeks after the incident, Philip P. Pan, a journalist from The Washington Post, claimed in the report ‘Human Fire Ignites Chinese Mystery’ that Liu Chunling’s hometown was in Kaifeng, Henan province. The local residents said that she sometimes hit her child and drove her elderly mother away and worked in a nightclub. Nobody saw her doing Falun Gong exercises. Regarding Wang Jindong, one of the self-immolators, CCP’s state-run press released his photos of three different versions.

The posture of Wang Jindong, including his hand position and sitting position, does not reflect the full or half lotus position required in Falun Dafa exercises. Some analysts take the view that his sitting posture is the standard cross-legged posture for Chinese soldiers.

He suffered burns all over his body, but he could sit as steady as Mountain Tai.

It is generally believed that once gasoline catches fire, it can reach 500°C. Even if a person puts his hands into boiling water of 100°C, he will not "stand still."

Also, the video footage shows that his body got scorched. However, the plastic sprite bottle with gasoline inside placed between his legs was intact, which was unbelievable.

CCTV’s female reporter Li Yuqiang later admitted that the sprite bottle between Wang Jindong’s legs was shot after the incident, when she talked to Falun Gong practitioners who were illegally detained in a brainwashing centre in Hebei province at a so-called seminar.

3.    Liu Baorong
Liu Baorong, attempted ‘self-immolation’, claimed when interviewed by CCTV’s Focus Interview, “The spirit is gone, while the physical body remains. It changes into a Buddha relic.” However, there is no such statement in Falun Gong’s books.

She said that she drank the gasoline half of the bottle. According to Medical Science Encyclopedia, human body’s absorption of gasoline of 7.5g per kg body weight will cause death.

On April 27, 2007, the Intermediate Court of Shijiazhuang City launched a second illegal trial over Wangbo’s family. Wangbo confirmed that Chen Guo, her schoolmate, ever took up the practice. When they got to know each other in 1999, Chen Guo had stopped the practice.

5.    Liu Yunfang
Chen Guo admitted that Liu Yunfang was the planner of the entire incident.

When first invited by CCTV’s ‘Focus Interview’, Liu Yunfang claimed that his self-immolation was to ‘ascend to heaven’.

After the claim of ‘self-immolation towards consummation’ was exposed, Liu Yunfang later adapted the self-immolation motive to ‘tell the truth’ on TV program. CCTV felt fearful that Liu Yunfang’s version could not justify himself, so it changed his words again and continued to make fake news.

6.    Was the girl able to sing after tracheotomy?
Liu Siying, the girl who was one of the self-immolation victims, underwent a tracheotomy. She was intubated on the 4th day after the operation, but she was able to be interviewed by CCTV reporters in a clear voice, and she could sing. This completely violates common medical knowledge.
A tracheotomy involves putting a tube into the throat below the vocal cords so that the patient can breathe. Based on common sense, she would be unable to speak for at least a few days.

7.    An CCTV reporter conducted interviews in a sterile ward, without wearing protective clothes? Xinhua News Agency reported: "Liu Siying, a 12-year-old girl, suffered 40% burns on her whole body, with fourth-degree burns on her head and face, ectropion of both eyelids, difficulty breathing, and with her face and hands nearly damaged.”

According to common medical knowledge, patients of large-scale burns need to stay in a sterile ward. However, the female CCTV reporter Li Yuqiang could approach and interview Liu Siying, without wearing any sterile clothes, a sterile cap, and a covered microphone, which was counterintuitive.

What was the background of Li Yuqiang?

Zhao Yimei (pseudonym), a senior reporter from the International division of CCTV in Canada, said, “The news about Falun Gong is the news of highest confidentiality at CCTV station. The articles are directly sent by confidential personnel in the editor-in-chief’s office, and staff from all departments consider it a political task to complete."

“The staff working at news group cannot send reporters to do interviews at their will. Only dedicated personnel can carry on interviews, which is extremely confidential.”

“None of us wants to take care of this thing. We’re aware that the news is fake, but we have to do it seriously.”

“Only those speculative reporters and editors directly under the control of the Dept of National Security had been arranged to do the news. CCP found them absolutely politically trustworthy.” In the video footage of the Tiananmen "self-immolation" hoax, the long-range, close, and close-up shots were all available. When foreign media questioned the source of these shots, CCP claimed that they were taken by CNN reporters on the scene.

A spokesperson for the CNN International Division pointed out that the CCP’s statement was untenable, because as soon as the incident occurred, their photographers got arrested, with their photographic equipment confiscated.

In the "self-immolation" video footage, a man carrying a camera bag can be seen. He calmly following the police at the square. Why can he shoot freely?

A person working at a TV station in mainland China said, “Reporters must apply for a permission before they go to Tiananmen. They have to go through every stage to get an approval. Should we visit Tiananmen and carry a camera without a Permit, we would be expelled right away. Shortly after self-immolation, the reporters shot this video at such a critical moment, with microphone even prepared. It is easy to tell the self-immolation was staged.”

Falun Gong forbids killing, so the self-immolators are not Falun Gong practitioners.

Falun Dafa, also known as Falun Gong, is a spiritual practice that rooted in Buddha School tradition. Falun Gong’s teachings clearly forbids killing and suicide. The genuine Falun Gong practitioners will not set themselves on fire.

Master Li Hongzhi said in the Lecture Seven of Zhuan Falun, “The issue of killing is very sensitive. For practitioners, we have set the strict requirement that they cannot kill lives.”

There are similar teachings in Master Li’s lecture in 1996. For instance,
Disciple: My third question is about the issue of killing mentioned in the book. Killing is an enormous sin, so is it considered a sin if a person commits suicide?

Master: It is considered a sin. If you mess up those things, they won’t let you off the hook, so suicide is sinful.
(from Fa-Teaching Given at the Conference in Sydney)

The international community condemned CCP for concocting Tiananmen Square Self-Immolation Incident.
The Financial Times pointed out, “There’s no evidence that the self-immolators were Falun Gong people.”

Ian Johnson, a reporter from "The Wall Street Journal", won the 2001 Pulitzer Prize for reporting on Falun Gong issues. He believes that the state-run press in Beijing reported the incident exceptionally quickly, indicating that the incident occurred much earlier than the report.

The telegram of "Reuters" wrote, "Beijing authorities were using the horrible image of the scorched body as the latest weapon in the media war against Falun Gong."

On August 14, 2001, at a U.N. conference, the International Education Development Organization strongly condemned CCP’s ‘state terrorism act’. The organization asserted that the self-immolation incident staged by Beijing authorities was to frame Falun Gong.

Editor’s note: In the press release of Xin Hua News Agency on January 31, 2001, the number of self-immolators reported on January 23, 2001 was changed from five to seven.