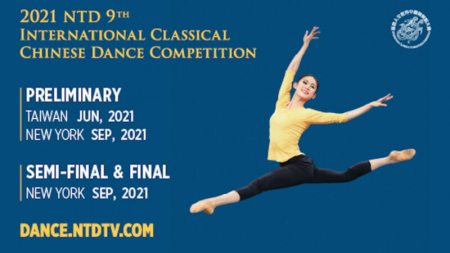 The 9th International Classical Chinese Dance Competition has been launched. The preliminary in Asia-Pacific region had just come to an end, whilst the semi-finals and finals are to be held at Tribeca Performing Arts Center between Sep 2nd to 5th in New York.

This competition is hosted by NTDTV. The official website stated, “The competition is built upon Classical Chinese Dance as a foundation. Its purpose is to boost cultural exchange and promote orthodox art.” Classical Chinese Dance is rooted in the culture of 5,000 years, performing three core elements: bearing (emotion, cultural and ethnic flavour), form (expressive movements and postures), and technique. It embodies rich cultural connotations and is one of the most comprehensive dance systems in the world.

The preliminary was conducted via video. The contestants now take the opportunity to perform on the stage and demonstrate their skills, which helps fully present the dance works. Moreover, ticket sales are open during semi-finals, finals and awards ceremony, with the finals to be broadcast via the Internet. Classical Chinese dance fans can not only experience this event live, but also appreciate the elegance of the contestants via Internet.

Tribeca Performing Arts Centre is located at Manhattan Community College, New York, which is renowned for performances of dance, drama and music. Since the 3rd competition in 2009, all competitions have been hosted here, and has now become a major event in art circle around New York and the world. The organizer said that the venue suits classical dance competition in terms of location, scale and professionalism.

The judges of the competition are senior dancers from Shen Yun Performing Arts to ensure the professionalism and fairness and to represent the highest level in the world today. Li Weina, one of the judges, said, “It is hard to see Classical Chinese Dance overseas, which has such a comprehensive training system. Today, NTDTV brings the program onto the international stage.”

Many contestants said that they have shown their best on the stage. The previous gold medal winner Cai Qiaochu said, "I feel that the competition has allowed me to reach my best level, without leaving any regrets." She also said, "The NTDTV makes people understand what traditional culture is about. Many things that are now respected in society and considered good are actually bad things. But the competitions let people identify the characteristics human beings should possess."

Since 2007, NTDTV has spread authentic Chinese culture by hosting competitions. Classical Chinese dance competition is one of the most popular, bringing together hundreds of contestants from all over the world.

The hosting organization also stated, "The competition is to promote classical Chinese dance onto the international stage. We also hope that such a splendid Chinese culture can emerge again in China. We believe that dance professionals inside and outside China have aspired to achieve the goal!"
Competition website： DANCE.NTDTV.COM
Registration hotline： +001 888 477 9228
Registration fax： +001 888 600 1998
Registration email add： dance@globalcompetitions.org