[PureInsight.org] On Jan 23, 2022, when nearing Chinese New Year, Falun Gong practitioners from Yilan County got together to do group exercises at Yilan Sports Park. They respectfully wished Master Li a Happy New Year and chanting Falun Dafa is good, and Zhen-Shan-Ren (Truth-Compassion-Forbearance) is good. 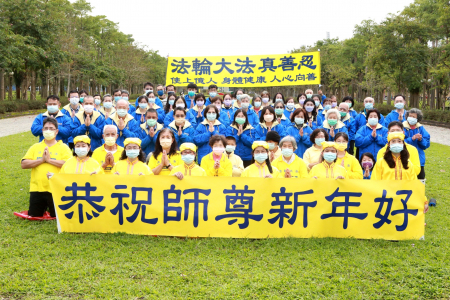 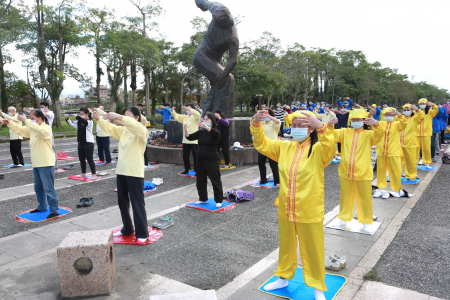 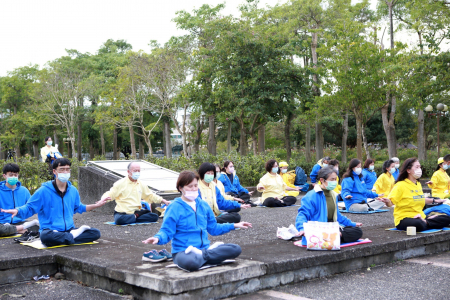 The practitioners felt grateful for Master’s imparting Falun Dafa to them. After they took up the practice, Dafa had their illnesses cured and helped them understand the real purpose of coming to the human world.

Falun Dafa, also known as Falun Gong, has spread to more than 100 countries since it was first introduced to public in May 1992. About 100 million people have benefited from practicing Dafa. It’s therefore Dafa has attained wide popularity. It’s a common phenomenon that most practitioners improved their physical wellbeing and upgraded their moral standard. The practitioners practiced Zhen-Shan-Ren in everyday life, which has made positive impacts on society.

The second life was granted by Dafa
Falun Gong practitioners in Yilan county are from all walks of life, including university professors and students, public servants, physicians, nurses, engineers, school teachers, and housewives. 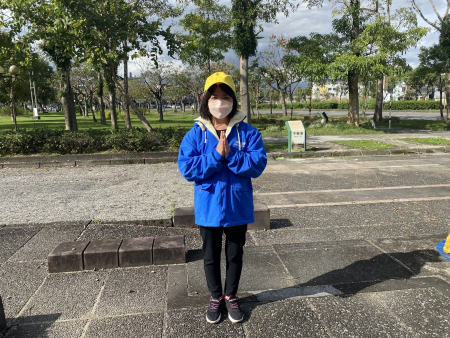 Ms Lin was nearly beaten by fatigue due to her doing business for years. She’d a cold almost 365 days a year. Also, her heart was not working well. Whenever she stood up, she felt physically overloaded. Fortunately, she started cultivating Dafa in 2005. Through studying the Fa and doing the exercises, she was able to take many issues lightly and turning younger. She said, “With the guidance of Master, I have become optimistic about my future. I really feel grateful for Master and I wish Master a happy new year.” 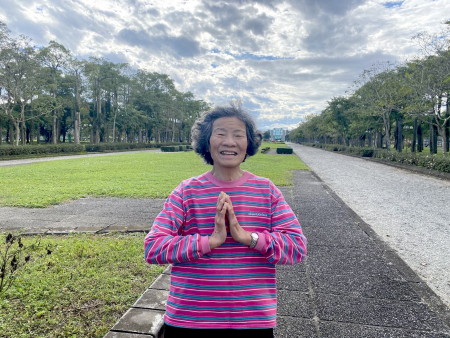 Granny Xu, 83-year-old, began to cultivate Dafa in 1999. Then a miracle happened. She did not have to take medicines. During Fa study, she came to understand lots of principles and stopped losing her temper. Over the past ten years, she worked as a voluntary coordinator at a practice site in Yilan county. Unless a long trip, she’s kept doing the exercises and hanging banners at the practice site everyday regardless of the weather condition. Ms Xu’s husband is from Fu Jian province, so she told him that his relatives in China need to quit CCP (Chinese Communist Party). Also, she helped other Chinese people to withdraw from CCP. 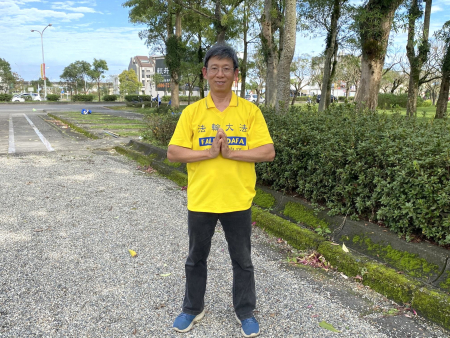 Mr Weng, who retired from a construction plant, took up the practice in 2004. At that moment, he took an interest in various Qigong schools. One day, he saw some Falun Gong practitioners meditating at a nearby school. When he learned to do the exercises, he found that Falun Gong practice is significantly from other Qigong schools. Dafa is cultivating both mind and body and helped him to understand that a cultivator should follow Zhen-Shan-Ren. Though sometimes his human mindset was heavy, he gradually abandoned lots of attachments through Fa study. When he saw others involving in conflicts, he could realize that he himself should look within.

Mr Weng’s joined in many activities of spreading the Fa for years, which assisted many people to learn about the grace of Dafa. He said, “As every vital information had been blocked by CCP’s comprehensive censorship system, many Chinese were unaware of the persecution. He made phone calls to China quite often, exposed the lies, told the facts and stopped people being poisoned by CCP.”

Ms Zhang, who lives in Wujie Township, received a booklet about Falun Gong at her mailbox in 2000. So she began to learn the practice together with her husband. After practicing Falun Gong, her nasal discharge, frequent urination and other symptoms were cured without medicine. In addition, she was getting along well with others and her conversation skill improved a lot. She is the eldest in the family. In order to financially support her family, she started to work at an early age. Because her mother preferred sons to daughters, she had a deep resentment against her mother for a long time. After cultivating Dafa, she abolished this resentment and was able to talk pleasantly. Moreover, she treasured the predestined relationship with her Mum. She is determined to look inward, elevate her Xinxing and respectfully wished Master a Happy New Year.