The Truth from Drawing Master’s Portrait 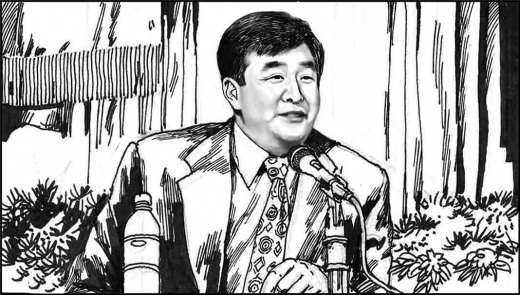 When readers saw this painting in a thousand paintings of “Jiang Zemin’s comic book series”, they all exclaimed, “Goodness! It’s so alike. Is this a photo of Master Li Hongzhi?” I said, “No, each stroke of the painting is drawn by hand.” And there is an arduous story accompanying it.

The figure in the painting is Master Li Hongzhi, the founder of Falun Gong. The content of this painting in the comic strip is at a time when He sees His disciples facing the enormous pressure of being persecuted by the Chinese Communist Party, but still persisting in the spirit of following the guiding principles of Falun Gong - ‘Truthfulness, Compassion, and Tolerance.’ However, as Master said in Teaching the Fa at the Discussion on Creating Fine Art, “Well, so many people have made sculptures and painted portraits for me, but in the end none of them look like me. It's fine for you to paint me, that's not a problem. You can just use a photograph to paint from.”

We were having some problems when producing ‘Jiang Zemin’s comic book series.’ The painter I worked with is a professional painter who mainly produced realistic oil paintings and comic strips, which were sold in galleries around the world. The ugly image of Jiang Zemin and the figures of many famous Chinese people painted by him are all very life-like. However, most of his paintings of Master Li Hongzhi, especially the above one, were not life-like. The painter said that he had never seen Master in person and could only draw according to the photos he had. However, he also had not seen the many famous Chinese people in person that he had painted either, and had successfully painted them. He had no idea how to improve.

When the first draft was serialized on Minghui.net and the Epoch Times, The Minghui staff asked me to change all the pages with drawings of Master Li Hongzhi before publishing. Although it was better after the change, they were still not life-like. In order to make the publishing deadline, the first draft could only be like that. At that time I had no choice.

A year or so later, another media wanted to serialize the comic strip. The editor of the media was more responsible and asked me to change the drawings of Master Li Hongzhi that were not drawn life-like enough. After more than a year, my cultivation had certainly improved, so for the second round, only some pictures are more life-like. However, I found that this picture was not yet life-like enough. I really felt that I could not improve any more. I know there are some doubts in my heart that I don’t know how to draw. This is the most respected person. I found it difficult once I picked up the pen - I always ponder if I should draw a little lighter or more elegant or, is it even necessary to rejuvenate the portrait? These thoughts just made it even harder to draw.

Then, in 2008 I went to New York to participate in the Falun Dafa Day celebration parade. Among thousands of people, I found Professor Zhang Kunlun and was able to talk with him. Even though we did not know each other, he was very honest with me. I asked him about the difficulties that I was having drawing Master Li Hongzhi. He said, “In fact, the image of Master Himself has been changing.” This dispelled one of my concerns. I understand that since we are showing a particular scene, then we will just draw the image of that moment. It is interesting to note that this was the only time I had met Professor Zhang in the past 15 years while overseas.

After the parade, I went to visit my uncle Ye Hao. In his small living room, there was a sketch portrait. The picture was drawn according to the photo on the earliest Mainland Chinese version of Zhuan Falun. Uncle Ye smiled and told me that this was a self-portrait. I took a closer look. The portrait was very large and in black and white, the black part is very dark, and the shape is very strong. The image was also very delicate and accurate. After seeing that, it dispelled my worries of whether or not I should draw lightly.

After returning home, I made a third revision to the drawing and was happy with it – I finally got it to look life-like. After that, the comic strip finally passed the review of the Chinese editor. With this final manuscript, I felt that the entire comic strip had been successfully completed and that we were ready to invite the Boda publishing house to publish.

In this process, I had a deeper understanding of what is ‘true’ - true, realistic, solid and simple... I realized why Master emphasized realistic painting in Teaching the Fa at the Discussion on Creating Fine Art. “Depicting what's taking place in the subjects' minds and their expressions through painting or sculpture, really bringing them to life, is not something that's achieved just by mastering the basic skills. Upright, true art is a major skill passed down to human beings by gods!” (Teaching the Fa at the 2003 Atlanta Fa Conference)
Master said in Teaching the Fa at the 2003 Atlanta Fa Conference, “I'll tell you, the basic skills of painting and drawing are not something that can be trained and learned in one or two years. Many people began their training at a young age, and it takes a long time. All those highly accomplished painters have honed their skill for over ten years or even decades. ”

I have been practicing the basic skill of drawing since I was a child. I am very grateful to all the art teachers who taught me from elementary school to university. They helped me lay a solid foundation. After all the time spent learning to draw since I was a child, I still could not grasp how to draw Master in a life-like manner, until I met Professor Zhang Kunlun and then visiting my Uncle. This is the wonder of cultivation.