[PureInsight.org] India’s Zee News published an article on November 24th that the CCP detained Falun Gong practitioners and forcibly harvested their organs. Abroad, the CCP steals American intellectual property rights and covers up the truth about the CCP virus. More and more people demand that the CCP be designated a terrorist organization. 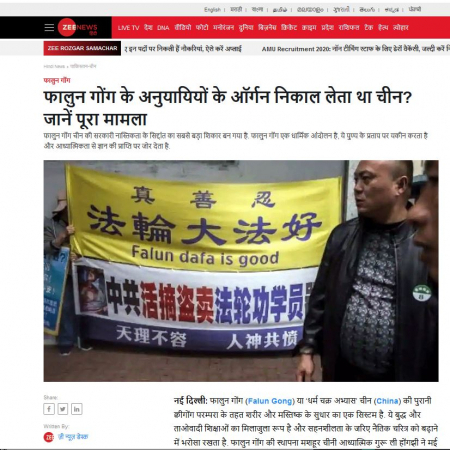 The United States is concerned about the increasing espionage activities and expansion of the Chinese Communist Party. The United States is particularly concerned about the espionage activities conducted by the Confucius Institutes used by CCP. In addition, the CCP also engages in illegal trade, stealing intellectual property rights, covering up the truth about the CCP virus, conducting cyber attacks, and invading islands in the South China Sea. According to American legal experts, these activities can be classified as terrorist activities.

Scholars say that the CCP has launched a "clearance campaign" in an attempt to eliminate dissidents across China. As part of the campaign, the CCP also detained Falun Gong practitioners and forcibly harvested their organs.

The reports of the U.S. Congress, the testimony of former CCP officials, and reports from the public have all exposed these bloodthirsty acts of the CCP. What needs to be emphasized is that these Falun Gong practitioners are detained in "mental hospitals" or "black prisons." To force them to give up their faith, the CCP injected them with psychotropic drugs and tortured them.

The CCP also persecuted Tibetans, Buddhists, and Uyghurs and imprisoned them in concentration camps.

The article also stated that the CCP issued a document instructing the persecution of these people. The CCP’s propaganda agencies and the media re-spread rumors and propaganda, resulting in these illegal torture and persecution.

The CCP police were sent to the community to carry out specific persecutions and to monitor these victims 24 hours a day, in an attempt to convert them.

The article believes that it is very important to designate the CCP as a terrorist organization. It will help punish those involved in espionage activities, and it will also help restrict CCP spies from entering the United States or expelling them from the country.

Designating the CCP as a terrorist organization will also help protect the persecuted groups from extinction and will promote civil liberties worldwide. Most importantly, this is essential to build a world that is peaceful, stable and based on the rule of law.