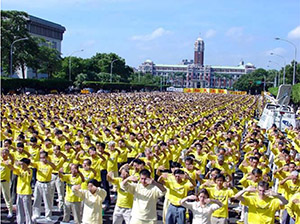 Falun Dafa, also called Falun Gong, is an advanced practice of the Buddha school self-cultivation founded by Master Li Hongzhi. It is a discipline in which “assimilation to the highest qualities of the universe—Zhen, Shan, Ren (Truthfulness, Compassion, Forbearance)—is the foundation of practice. The practice is guided by these supreme qualities and based on the very laws which underlie the development of the cosmos.” Master Li’s teachings are set forth in a number of texts, among which are included Falun Gong, Zhuan Falun, The Great Perfection Way of Falun Dafa, Essentials for Further Advancement, and Hong Yin (The Grand Verses). These and other works have been translated into thirty-eight languages, and are published and distributed worldwide. They are also available for free download at http://falundafa.org/.

After Master Li first introduced Falun Gong to society in 1992, the number of cultivators rapidly increased. By 1999, Falun Gong had grown to become the largest and fastest growing cultivation practice in Chinese if not world history.

Today, Falun Gong is practiced and cherished by over 100 million people in over 100 countries, with clubs and associations existing in a range of cities, companies, universities, and other settings.

We hope this book broadens your perspective and inspires your life.