A Practitioner in Russia

[PureInsight.org] The mere mention of this place evokes a gamut of emotion and images in people: a contact with something mysterious, sinking ships and planes disappearing into nowhere, distortions in time-space, mistrust, fear and a desire to find out the truth hidden behind these mystical phenomena.

The Bermuda Triangle is an area in the Atlantic Ocean where, ostensibly, mysterious disappearances happen at sea and in air. The area is marked by borders from Florida to the Bermudas, further south to Puerto Rico and back to Florida through the Bahamas. A similar “triangle” in the Pacific Ocean is named “devilish.” Various hypotheses put forward that explain these disappearances include unusual weather patterns and alien abductions.

The first of the “mysterious disappearances” in the Bermuda Triangle were mentioned by a correspondent from the Associated Press, Edward Van Winkle Jones. In 1950, in his article he named this area “the sea of the devil.” The author of the word-combination “Bermuda triangle” is considered to be Vincent Gaddis, who published an article in 1964 in a magazine devoted to spiritualism, "The Deadly Bermuda Triangle."

In the late 1960s to early 70s, numerous publications about the secrets of the Bermuda Triangle began to appear.

In 1974, Charles Berlitz had published a book, “The Bermuda Triangle,” a collection of various mysterious disappearances in this area. The book became a best seller, and after its publication, theories of the unusual features of the Bermuda Triangle became especially popular. However, later on, it was shown that some facts presented in the book were incorrectly stated.

In 1975, Lawrence David Kusche published a book, “The Bermuda Triangle Mystery: Solved,” where he tried to argue that nothing supernatural or mysterious happens in that area. This book is based on long-term research of documents and conversations from eyewitnesses. But supporters of the existence of the elusive Bermuda Triangle revealed numerous errors and discrepancies in this book.

Nevertheless, mystical incidents around the area of the Bermuda Triangle cannot be ignored. Cases of mysterious disappearances in this area excited the minds of people from the beginning of the 1960s. The most known and mysterious of them is the loss of a whole squadron of American military planes. Five bombers with 14 crew members suddenly went off the radar screen within the region of the Bermuda Triangle during flight training. A plane with a crew of 13 on board went in search but it disappeared as well. Neither plane, nor any aircraft fragments have been found to this day.

After 25 years of silence, in 2003, a book written by Gian J. Quasar, “Into the Bermuda Triangle: Pursuing the Truth Behind the World's Greatest Mystery” was published. The author has generalized 13 years of researched information taken from official sources such as NTSB, Coast Guard, Air Force and Navy and many foreign archives. The list of missing planes in the Bermuda triangle can be found here: http://www.bermuda-triangle.org/html/lost_aircraft.html

Incidents in the Bermuda Triangle

Supporters of the Bermuda Triangle theory mention disappearances of about 100 large sea and air vessels over the last hundred years. Other than disappearances, there are reported cases of perfectly working sea craft abandoned by crew members and other unusual phenomena, such as instantaneous transportation into space, anomalies with time, etc. David Kusche and other researchers have shown that some of these cases took place outside of the Bermuda Triangle. Official information on some incidents are impossible to find. However, unusual behaviour of compasses in the area of the Bermuda Triangle was even mentioned as far back as by Christopher Columbus in his diaries of sea navigation. Many eyewitnesses shared their experiences that took place in the Bermuda Triangle, among which were strange behaviour of compasses, entering into tunnels, unusual clouds, entering into unusual rotating substances similar to eggnog and exiting from them through something similar to a curtain, an unusual luminescence, sparks, and others. 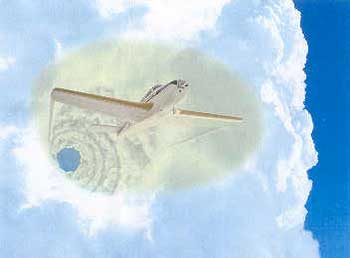 Master Li Hongzhi, the founder of the spiritual practice Falun Dafa gives a similar explanation to the phenomenon of the Bermuda Triangle in his book, Falun Gong:

“Even though some people don’t admit the existence of certain things, they have actually manifested in our dimension. For example, there is a place called the Bermuda Triangle (or ‘Devil’s Triangle’). Some ships and planes have disappeared in that area, only to re-emerge years later. No one can explain why, as no one has gone beyond the confines of human thinking and theories. In fact, the Triangle is a gateway to another dimension. Unlike our regular doors that have definite positions, its status is always unpredictable. A ship can easily enter another dimension if it passes through when the door there happens to be open. Human beings cannot sense the differences between the dimensions, and they enter into the other dimension instantly. The differences in time and space between that dimension and our dimension can’t be expressed in miles—a distance of thousands of miles there might be contained in one point here. That is, they might exist in the same place and at the same time. The ship swings in for a moment and comes back out again by accident. Yet decades have passed in this world, since time is different in the two dimensions. There are also unitary worlds existing in each dimension. It’s similar to our models of atomic structures wherein one ball is connected to another by a string, involving many balls and strings. It is very complex.

A British pilot was carrying out a mission four years prior to World War II. In the middle of his flight he ran into a heavy thunderstorm. By drawing on past experience, he was able to find an abandoned airport. The moment the airport appeared before his eyes, a completely different picture came into view: All of a sudden it was sunny and cloudless, as if he had just emerged from another world. The airplanes at the airport were painted yellow, and people were busy doing things on the ground. He thought it was so odd! No one acknowledged him after he touched down; even the control tower didn’t contact him. The pilot then decided to leave since the sky had cleared up. He flew again, and when he was at the same distance at which he had seen the airport moments ago, he again found himself in a thunderstorm. He eventually managed to get back to his base. He reported the affair and even wrote it down in the flight record. But his superiors didn’t believe him. Four years later World War II broke out, and he was transferred to that same abandoned airport. He immediately recalled that it was exactly the same scene he had seen four years earlier. We qigong masters know how to explain it. He did in advance what he would do four years later. Before the event had begun, he had gone there and played his role in advance. Things then returned to the correct order.” (Falun Gong, Chapter 1, (4) Dimensions)

It is left for the readers to reflect on this theme and to make their own conclusions.