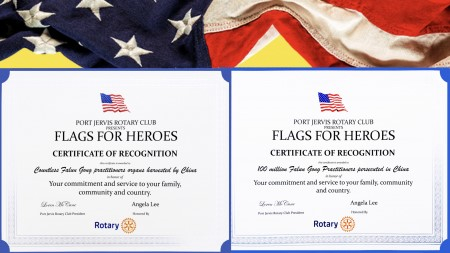 Loren Mccune, the current president of Rotary Port Jervis, said, “We allow everybody of our community to pay great respect to the forefront emergency personnel, doctors, nurses, police, firefighters, first-aid personnel and educators.” 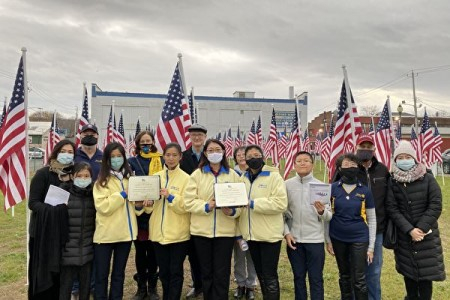 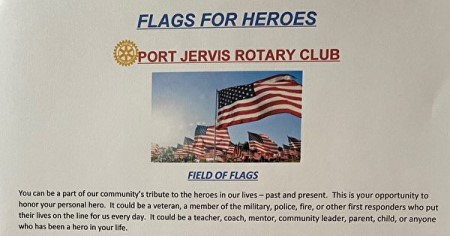 Figure 3:  A screenshot of the content of "FLAGS FOR HEROES" hosted by Rotary Port Jervis in New York.

He said: "The national flag symbolizes courage, freedom, loyalty and justice. Our community event is celebrating those warriors who have wholeheartedly defended American values and the truth. Their spirit will be celebrated in the free land permanently."

Rotary Club is a non-political and non-religious institution established in 168 countries and regions. Its purpose is to gather talents from all walks of life, to provide humanitarian services, and promote world peace.

On the day of the event, 143 American flags were placed on the large lawn on one side of the street. The Stars and Stripes sea was eye-catching from a distance, and the dancing flags looked solemn. Each flag represented the nominated hero or an organization, and the spirit they pursue. All the flags will be displayed in Port Jervis community throughout November. 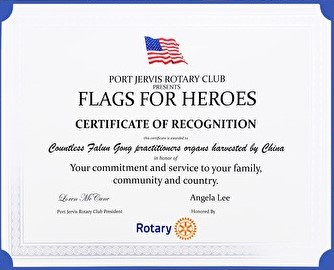 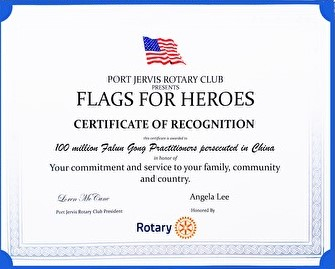 Figure 5:  On November 15th, the Rotary Port Jervis in New York hosted the event, tributing the stars and stripes to 100 million Falun Gong practitioners in Mainland China. The image shows the Certificate of Recognition, which was provided by the organizer.

President Loren Mccune said, “Some people from our community found Falun Dafa wonderful when they approached local practitioners. The two national flags were tributed to persecuted Falun Gong practitioners in Mainland China because of their fearlessness and perseverance in resisting CCP’s tyranny.”

Also, he said, "Americans will stay connected with people all over the world who defend traditional values for ever. In particular, we’d love to help Falun Gong practitioners in mainland China. They deserve our respect. Communism is totally against American values, while American people find communism unacceptable." 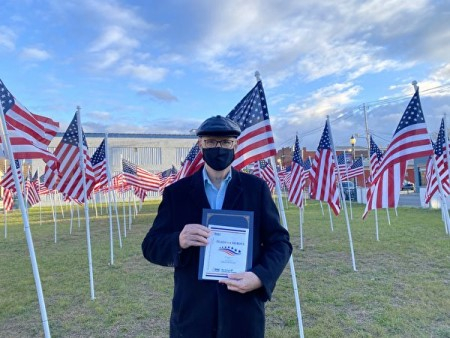 Figure 6: President Loren Mccune of Rotary Club of Port Jervis, New York. A few former presidents came to the event and expressed their pleasure to host this event.

Former President Angela Lee: “I know that 100 million Falun Gong practitioners have been brutally persecuted by CCP. Also, I’m aware that they have persisted in practicing Truth-Compassion-Tolerance in such a difficult circumstance. They deserve the title of heroes.”

The outgoing president Howard E. Kuperman said, "We aim to let people know that our heroes are sacrificed for justice. We should show our concerns about the persecution of Falun Gong."

The outgoing chairman James W Reyle said, "Falun Gong practitioners came to our community and told us what happened in China. This has raised our awareness. Everybody of us should work together to bring the persecution to an end."

Figure 8: Kay Rubacek, producer and director of documentary "Finding Courage", was at the event.

The outgoing president Amado Laput said, “I know live organ harvesting from Falun Gong practitioners. This is incredibly terrible. Those who can flee China are really lucky. I will pray for them.”

Kay Rubacek, who is award-winning producer and director of the documentary "Finding Courage". She said, "I know Falun Gong practitioners are very brave. They are heroes."

She said that during the filming of "Finding Courage", she learned about the three siblings who got arrested and persecuted in China for practicing Falun Gong, and how the survivors found the courage to seek the truth under communist regime.

The documentary reveals the CCP’s unprecedently brutal crackdown on Falun Gong. The heroine fled China. Her elder brother had been tortured during 13-year imprisonment. The body of her younger sister had been frozen for 19 years after she was persecuted to death.

When Mi Xiaozheng was studying architecture at Chongqing University, she was forced to stop schooling for practicing Falun Dafa. She was illegally detained six times and experienced a range of torture methods, such as sexual harassment, and was deprived of sleep for 9 days. Furthermore, she had a miscarriage due to harassment by CCP police, and was nearly kidnapped by police when she was 7-month pregnant for the second time.

She said, “I feel thankful for American people and community. Thank you for giving the honour to Falun Gong. CCP persecuted Falun Gong practitioners senselessly. In sharp contrast, practitioners were awarded in the U.S.”

“CCP’s infiltration into the U.S is to overthrow the institutions of the great nation. However, at this event, I can tell that American people are determined to safeguard traditional values.”

Wang Jing, wife of Da Lian Falun Gong practitioner Ren Haifei, said that her husband was brutally beaten at Ganjingzi Police Station in Da Lian on the day of his abduction. Though he suffered heart and kidney failure, the policemen did not stop interrogating him.

Wang Jing said: "Falun Dafa has been practiced in more than 100 countries and regions, regardless of gender, age, ethnicity and nationalities. The persecution in China has threatened the rest of the world. Living organ harvesting has severely challenged the bottom line of mankind’s morality. All nationalities who defend human rights will not tolerate CCP." 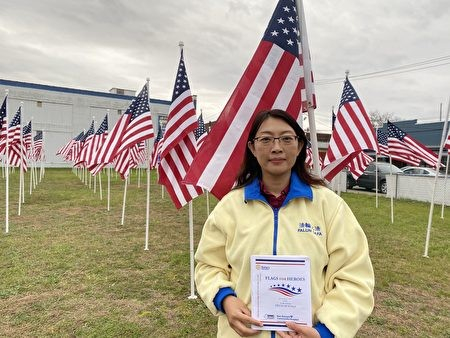