[PureInsight.org] On the afternoon of July 14, more than 2,000 Falun Gong practitioners mainly from northern Taiwan paraded on the streets of Taipei to remind Taiwan people of July 20, 1999, the day when CCP (Chinese Communist Party) started the illegal persecution on Falun Gong.  Some Falun Gong practitioners said, “We want to let Taiwanese people know the goodness of Falun Gong and gain deeper understanding of the persecution on Falun Gong by CCP in China. During the parade, many Taiwanese are willing to stand out and cheer for us.”

Falun Gong practitioners from Taipei, New Taipei City, Keelung City, Taoyuan City, Hsinchu County, Miaoli County, other counties and cities gathered on the square in front of the Taipei City Government. The parade had four groups, “the Divine Land Marching Band”, “Dafa Spreads the world”, “Grievous sufferings from the persecution”,   “Flags and waist drums”. The spectacular parade took place in the core districts of Taipei City, such as Xinyi District and East District, with a length of 4.4 kilometer. 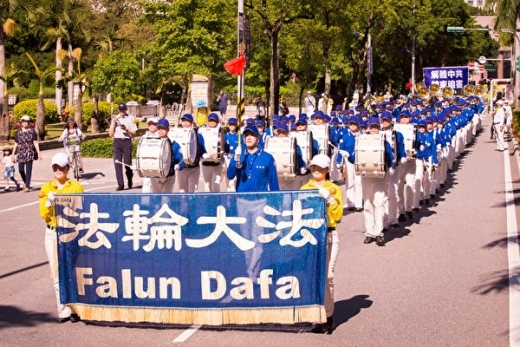 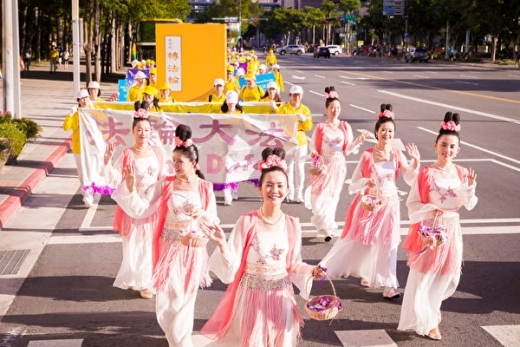 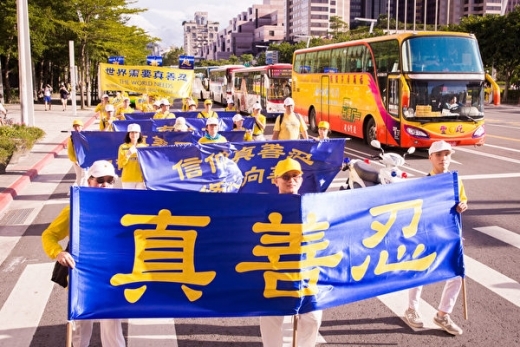 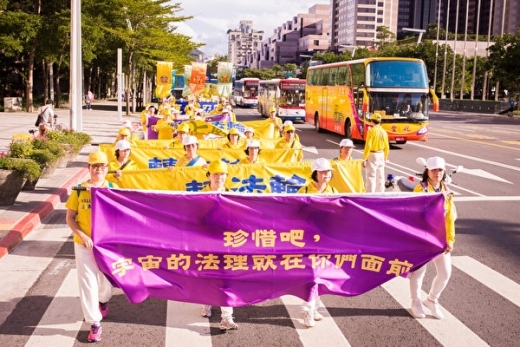 Mr. Bai said that he went to Taiwan's famous tourist attractions to tell the truth of Falun Gong to Chinese tourists. After many Chinese tourists knew the uncensored, valuable news about China, they often thanked Falun Gong practitioners with great joy and even took initiatives to quit CCP.

Ms. Wu, who has been practicing Falun Gong for 12 years, also goes to the sightseeing places to tell the truth of Falun Gong to Chinese tourists. During the parade, Ms. Wu did not join the marching band. Instead, she distributed truth clarification booklets about Falun Gong and lotus flower bookmarks to people along the streets who watched the parade.

"Following the parade, I feel honorable and great.  By walking along the streets and following the marching band, I was able to establish good connections with the crowd. I could let them know the goodness of Falun Gong.” Ms. Wu said with great joy that she found many Chinese tourists appear to be very surprised, who did not expect that there were so many Falun Gong practitioners in Taipei. Many people also gave Falun Gong practitioners thumbs up. 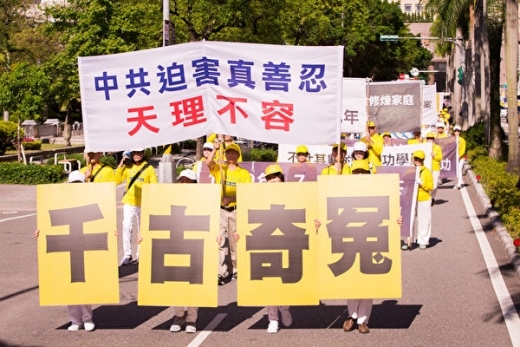 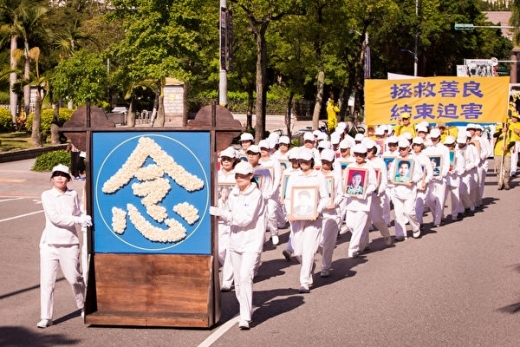 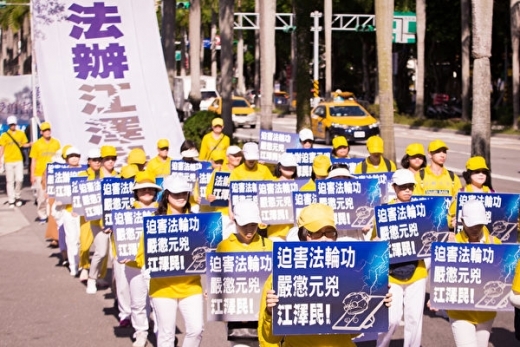 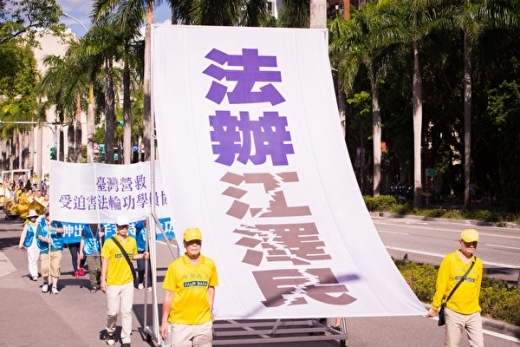 Ms. Wu said that people gradually and continuously changed their attitude about Dafa in a positive direction.  In the past, many people did not know much about Dafa, and they felt Dafa was too far away from themselves. However, because Falun Gong practitioners keep telling the truth and spreading the beauty of Falun Dafa, they start to interact with Dafa practitioners.

Ms. Wu said, "Chinese people know that Falun Gong is good and has spread to over 100 countries. Although they may not dare to take actual actions to support Dafa due to the persecution in China, they still have their own criteria to judge good and bad in their heart”.

Ms. Wu continued, “Taiwanese people live in a free society. They know Falun Gong is good. They are always nice to Falun Gong and support the Taiwanese government to give Falun Gong practitioners the right to appeal.”

Mr. Zhong, who has practiced Falun Gong for five years, believed that the brutal nature of CCP is completely shown through the persecution on Falun Gong. He explained that most people in Taiwan dislike CCP, and do not want to know what is going on in China. However, this attitude of negating everything will cause more misunderstandings.

Mr. Zhong said that Falun Gong practitioners can freely practice Falun Gong in Taiwan, but in China they will be persecuted, imprisoned, and their vital organs harvested. This obvious contrast can reveal the difference between liberal democracy and authoritarian dictatorship.

Mr. Zhong said that Falun Gong is a traditional qigong practice in the Buddha school. It can heal people’s illnesses and keep people fit. Falun Gong is a very good practice. He urged the Communist government to stop the persecution on Falun Gong practitioners immediately and let people in China freely practice Falun Gong.

Regardless of age and gender, every Falun Gong practitioner bore the hot weather and paraded in Taipei City, in order to let Taiwanese know more about Falun Gong. Ms. Lai, who was 9-month pregnant and participated in the parade, was very distinguishable.

Ms. Lai, who has been practicing Falun Gong for 13 years, is expecting a baby next week. Because of the weights of her future baby, it was more difficult for her to walk compared to other people. But she still chose to participate in the parade. She said the reason why she finished the parade was that she benefited a lot from practicing Falun Gong over the past 13 years. She cherished every opportunity to let people know the goodness of Dafa.

Ms. Lai said, "When I was walking, I felt my left foot cramping a little bit, but I didn't care too much about it. Because I did not care much about it, I found my foot was painless and walking became easier for me.”

"I was very fortunate that I was pregnant after practicing Dafa." Ms. Lai said that she used to be very bossy. If she did not practice, she would have prenatal anxiety. All kinds of prenatal preparations will be upsetting to her, and she will be overly worried about the process of giving birth to a baby. But now she knows how to take it easy, "I should be rational, calm and be a good mother."

"I hope that my future child will be a Falun Dafa disciple and cultivate Dafa with me together" Ms. Lai said that because she practices Falun Gong, she acts according to the principle of "Truthfulness-Benevolence-Forbearance". She learns from Dafa how to empathize others and be a good person. She benefits a lot from Dafa. “I hope my future child will know Dafa, and learn how to behave as well as how to interact with others from Dafa.”

Ms. Lai, who lived in Sweden, North Europe, once told her Swedish friends about the persecution of Falun Gong in China. She said that Sweden is a country that attaches great importance to equality and human rights. When her Swedish friends know the CCP has persecuted Falun Gong practitioners, extracts their organs, and separates Falun Gong practitioners from their families and even kills them, they were shocked. Because in their mind, such thing should not exist and happen at all. 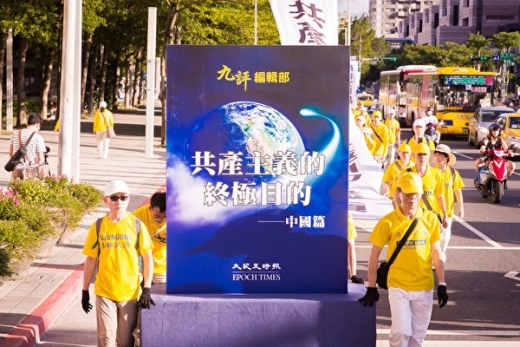 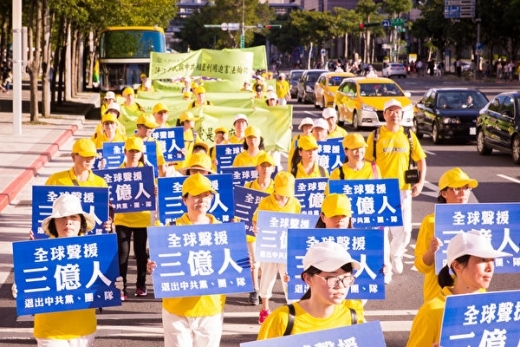 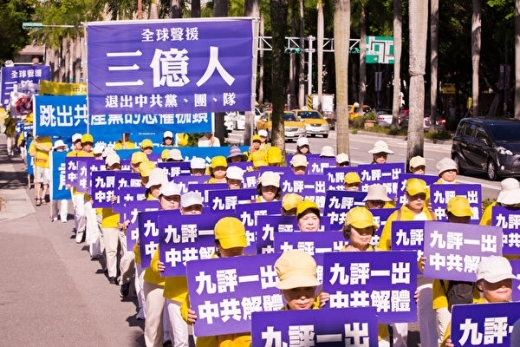 Ms. Lai said that from her previous experiences with Swedish friends, she realized that there were still a lot of people who were unaware of the truth of the persecution. She therefore needed to clarify the truth to those people. That’s why she felt great importance to the parade. Parade could connect more people with her, which gave them opportunities to know the truth of Falun Gong and support Falun Gong to stop the persecution.

Ms. Zhang specifically mentioned that during the parade, she wanted to leave her good thoughts to the people watching the parade. She said that even though the weather was very hot, she still kept calm, maintained a peaceful mind and smiled. She also kept her clothes neat, because she wanted the public to see the beauty of Falun Gong.

Mr. Xu, who has practiced Falun Gong for more than 20 years, said that on the eve of July 20th every year, Falun Gong practitioners would parade all over the world to protest against the persecution on Falun Gong by CCP. The purpose is to tell the people around the world that practicing Falun Gong is beneficial both physically and mentally, which is a wonderful thing, and to urge the governments of different countries to stand out and stop the persecution in China.

During the parade, Falun Gong practitioners passed through many prosperous areas in Taipei, and many Taipei citizens as well as foreign tourists stopped to watch the parade.

Mr. Wu said that Falun Gong practitioners in the parade were from all ages and genders, which made him realize that Falun Gong in Taiwan is able to spread freely. This is different from China. He learned a lot.  He also said that he respected Falun Gong. Through the parade, he came to understand the truth of Falun Gong. He would tell his friends in China about the parade.