[PureInsight.org] The year 2017 marks the twenty-fifth anniversary of Falun Gong’s introduction to the public. Falun Gong’s founder Mr. Li Hongzhi personally attended the New York Fa Conference of tens of thousands of people. There was also a grand parade in Manhattan. Various levels of government in the United States and Canada passed resolutions and issued awards to celebrate World Falun Dafa Day.

In August, the US Secretary of State pointed out the CCP’s persecution of Falun Gong at a news conference.

Image: On May 14, 2017, tens of thousands of Faun Gong practitioners held an experience sharing conference, Mr. Li Hongzhi personally attended to give a Fa lecture

On May 14, 2017, tens of thousands of Falun Gong practitioners from 58 different countries and regions gathered at the Barclays Center in New York for an experience sharing conference. This was the culmination of four days of Falun Gong practitioners’ celebration of the twenty-fifth anniversary of Falun Dafa’s introduction to the public. Falun Gong’s founder Mr. Li Hongzhi personally attended the conference to give a Fa lecture.

The Fa lecture lasted for approximately two hours, reminding Falun Gong practitioners to cultivate themselves well, walk their own paths well, and cherish the remaining time.

A dozen practitioners from countries around the world shared their cultivation experiences onstage. They spoke of their experiences following the principles of “truthfulness, compassion, and tolerance” taught by Master to improve themselves and become better people in everyday life, work, and while clarifying the truth.

On May 12, two days before the Fa conference, tens of thousands of Falun Gong practitioners from 57 different countries and regions held a grand parade in New York, shocking Manhattan.

2. Various Levels of Government in the United States and Canada Praise Falun Gong 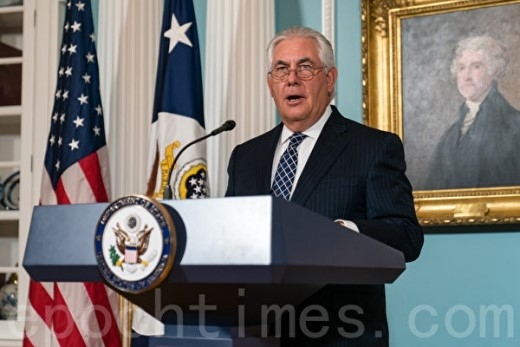 Image: On August 15, 2017, US Secretary of State Rex Tillerson addressed the State Department on the 2016 Religious Freedom Report

In Canada, politicians at all levels presented 15 awards and 44 congratulatory letters in 2017 to celebrate World Falun Dafa Day.

They praised Falun Dafa for teaching “truthfulness, compassion, and tolerance” to the benefit of hundreds of millions of people all over the world. Through their values, Falun Gong practitioners have set an example for the world.

On August 15, 2017, the US State Department released the 2016 International Religious Freedom Report. China was once again listed as a “country of special concern.” At a press conference, Secretary of State Rex Tillerson mentioned that in 2016, “dozens of Falun Gong practitioners died while in custody.”

According to the report, 80 Falun Gong practitioners died in custody or shortly after their release in 2016.

This is the first religious freedom report released by the Trump administration. It is also the first time in the past 18 years that the Secretary of State released a report specifically pointing out the CCP’s persecution against Falun Gong.

About a month before the report was issued, eastern US Falun Gong practitioners held a large rally on Capitol Hill, calling for “An end to the persecution and bringing justice to Jiang Zemin.” Over a dozen US congressmen and representatives of non-governmental organizations were present. 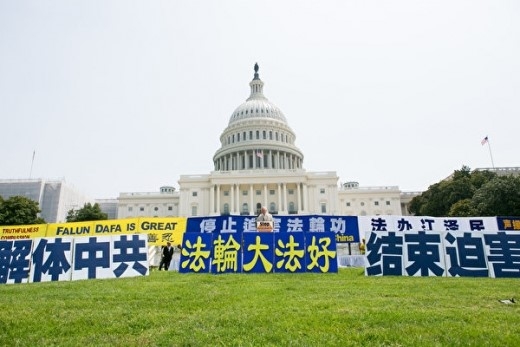 Image: On July 20, eastern US Falun Gong practitioners held a large rally on Capitol Hill, calling for a halt to the CCP’s persecution of Falun Gong for 18 years

Congressman Dana Rohrabacher said at the rally, “[Falun Gong practitioners] have saved the world from evil forces. Thank you for your efforts.”

House speaker Ileana Ros-Lehtinen said at the rally that Resolution 343 passed by the House of Representatives is “a loud and clear voice to the CCP to immediately stop the persecution against Falun Gong, immediately release all Falun Gong practitioners, and immediately end the inhumane live organ harvesting.”

According to incomplete statistics, between January 2017 and December 4, 2017, over 800 Falun Gong practitioners, including the elderly, were illegally sentenced by the CCP. At the same time, many detained practitioners were tortured, paralyzed, and endangered.

According to news report on December 17, 2017, Feng Airong, a Falun Gong practitioner in Linzhou city, Henan province, was persecuted in Xinxiang Women’s Prison in Henan province until she became blind and paralyzed in the lower body. Prior to February 23, Feng Airong was illegally prosecuted and given a three year sentence.

Falun Gong practitioner Ye Weidong from Haimen, Jiangsu province was illegally sentenced to a year and nine months for forwarding a text in a QQ group. Presiding judge Lu Weidong told family members that pressure came from above (Central Political and Legal Affairs Commission, 610 office) to give the sentence and that he was just a puppet.

Yang Hong, a talent returning to Tianjin from studying abroad in Japan, and his wife Jiang Yahui (Shuang Shuang) were illegally sentenced to six years.

Liu Xiyong, a 76-year-old Falun Gong practitioner from Jinzhou district, Dalian city, Liaoning province, was sentenced over a month before the trial in October 2017. Liu Xiyong was not informed until November 10 that the sentence was for three years. However, the verdict was decided on September 19.

The Minghui website says that the persecution of Falun Gong practitioners by the CCP, from charges to sentences, are all determined by the “610 office” created solely to persecute Falun Gong and the Central Political and Legal Affairs Commission. The so-called judges are just puppets of the CCP. The so-called trials are carried out to deceive the outside world.

5. Over 400 Mainland Lawyers Defended the Innocent

From January to November 2017, mainland lawyers defended at least 417 innocent Falun Gong practitioners, of which 196 defenses occurred in the first half of the year.

According to statistics, from January to November this year, mainland lawyers defended over 400 innocent Falun Gong practitioners in court. (Minghui website)

On November 7, 2017, Professor Liang Jianjun was illegally taken to Lechang court in Guangdong province. Two lawyers from Beijing and Guangzhou defended Liang Jianjun on the basis of the Chinese constitution and the Berlin court case and demanded that Liang’s innocence be returned. Lawyer Zhang also quoted the Berlin Wall case to remind trial coordinators that they will be subject to a historical trial in the future.

The CCP’s persecution of Falun Gong is illegal. Article 36 of China’s Constitution states: citizens have freedom of religious belief.

On December 11, 2017, the Yanshan county court in Hebei province illegally tried Falun Gong practitioners Yang Yueliang and Liu Wenting. That day, a CD of the Truthfulness-Compassion-Forbearance International Art Exhibition was played in court for about twenty minutes, shocking the audience. The lawyer pointed out that the exhibition’s art and music were beautiful and filled with compassion and peacefulness. The CD’s content expressed the beauty of believing in “truthfulness, compassion, and tolerance” and the heavenly principle of reaping what one sows; there was nothing illegal about it.

On November 2, 2017, Falun Gong practitioner Wang Yuhong from Chaoyang district in Beijing was illegally tried. Defense lawyers pointed out two major misunderstandings about Falun Gong by the CCP public prosecution office: one is the falsified Tiananmen Square “self-immolation” case, and the second is not allowing people to see doctors when they are sick. However, these two misunderstandings are both the CCP’s propaganda aimed at discrediting and maintaining its persecution of Falun Gong.

According to statistics from the Minghui website, from January to December 20 2017, at least 75 Falun Gong practitioners were released from public security, courts, Procuratorate, and other departments in mainland China due to case withdrawals and other reasons.

6. At least 32 Falun Gong practitioners were persecuted to death 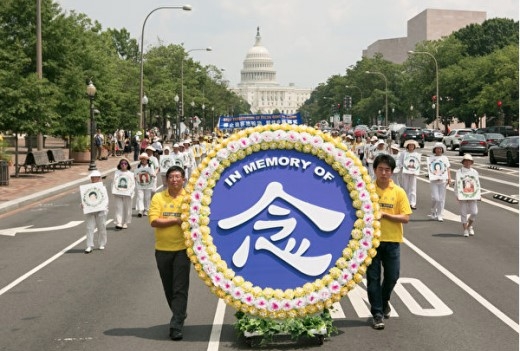 According to incomplete statistics, from Jan.1, 2017 to Dec. 20, 2017, at least 32 Falun Gong practitioners in 15 provinces in China were persecuted to death. Some of them were in their sixties or seventies.

Guixiang Yu, 65 years-old, lived in Changchun City in Jilin province. On June 20, 2017, she passed away, 4 days after she’s kidnapped.

Runzhi Huo, 73 years-old, lived in Nongan County in Jilin province. He had been kidnapped by CCP twice and detained illegally 7 times. She passed away on Nov. 4.

While those practitioners were put in prison illegally, some developed cancer. They were electrically shocked, beaten up, or tortured physically and mentally for a long time.

From July 20, 1999 when CCP started to persecute Falun Gong, through the private route, over 4000 Falun Gong practitioners were confirmed of death due to the persecution. Due to CCP’s censorship and the ongoing persecution, this number is only the tip of the iceberg.

7. People of all ethnic groups “come one after another”

Although the persecution of Falun Gong is still ongoing in China, people in North America, Europe, South America, Asia, etc., in all different ethnic groups “come one after another” to start practicing Falun Gong. Classes with full credits are opened at some universities in USA to introduce Falun Gong to students. 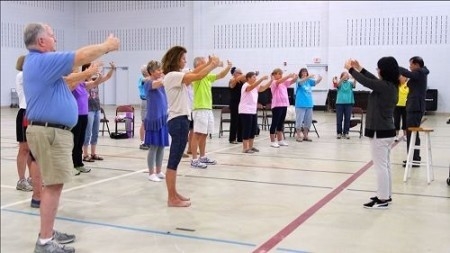 In Fall, 2017, the honor class of introducing Falun Gong was opened to students with GPA 3.5 or higher at the University of South Carolina Aiken. The name of the class was “Introduction to Falun Dafa Meditation and Cultivation”, its class number was “HONS 201”. 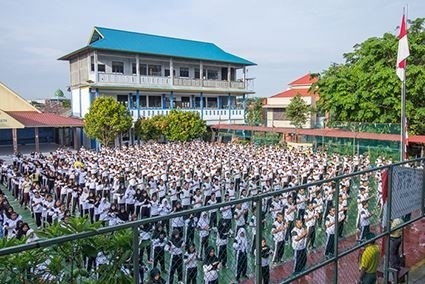 On Nov. 11, 2017, some Falun Gong practitioners went to Batam Island high school in Indonesia to introduce Falun Gong to over 700 students and teachers.

Currently Falun Gong has spread to over 100 countries all over the world. The book “Zhuan Falun” was translated into over 40 languages. Mr. Li Hongzhi was nominated for Nobel Peace Prize for 4 consecutive years from 2000 to 2003. 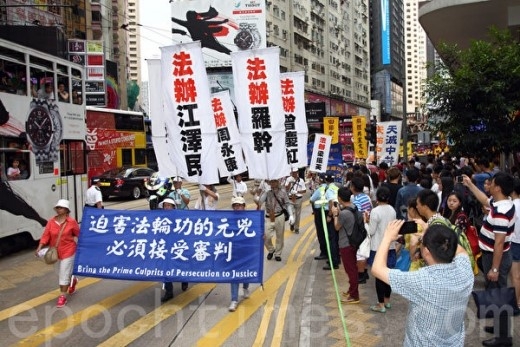 In China, as of early December 2017, at least 31 officials at deputy provincial and ministerial level or above were removed from office, put on trial or were jailed. They are:

CCP has been persecuting Falun Gong for 18 years. Lots of officials followed Zemin Jiang to persecuted Falun Gong and got promoted to important positions in CCP, or army, or local governments. They persecuted Falun Gong actively. On the surface, they were deposed due to corruption, but for thousands of years in China people always believe “Good will be rewarded and evil will be punished”.

Zemin Jiang was sued by over 210,000 Falun Gong practitioners and their relatives all over the world. As of December 8, 2017, the movement of “Globally Support Chinese People Suing Zemin Jiang for Joint Criminal Reporting” was supported by 2.6 million people in 31 countries. 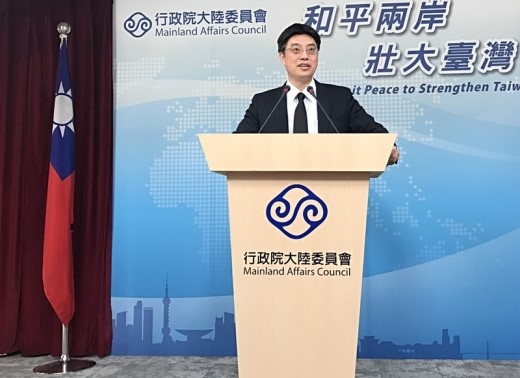 The federation of examination in Taiwan, recently refused 3 people in China to visit Taiwan. The federation consists of Immigration Department of Republic of China, Mainland Affairs Committees, etc.

The Vice Chairman at Mainland Affairs Council, Chuizheng Qiu confirmed that as long as officials in China had the history of persecuting Falun Gong, or they are related with 610 offices (an illegal office created by CCP to persecute Falun Gong), they will be refused entry to Taiwan. This illustrates Taiwan protects human rights.

In 2004, Epoch Times newspaper published “Nine Commentaries about Chinese Communist Party”. It explained the characteristics of CCP: anti-heaven, anti-earth, and anti-universe. It triggered the movement of quitting CCP.

On October 19, 2017, a lawyer nick-named “Sunshine” wrote in quitting CCP: “In recent years I find CCP is heading towards a horrible path. This party has not only destroyed several Chinese generations but has spread to the world like a virus. CCP is not only the root cause of the suffering for Chinese, but the evil cult poisoning the human kind.”